Book Review: Memoir adds depth and context, mixing the personal and the political 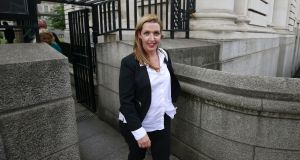 Vicky Phelan writes about the moment she heard her test result was incorrect: “A question suddenly came to me. ‘Are there other women in this situation?’” Photograh: Nick Bradshaw/The Irish Times

Many of us will remember that sunny day, April 25th 2018, when a relatively unknown mother from Limerick stood in front of the Four Courts in Dublin and lifted the lid on what has become one of the greatest political and medical scandals of our time.

In speaking out, Vicky Phelan gave voice to those who had been suffering in silence, as it emerged that more than 220 women with cervical cancer had initially been given the all-clear based on smear tests carried out by the CervicalCheck screening programme.

Since then, Phelan has become a tireless campaigner for women who have suffered at the hands of the healthcare system – all the while fighting for her own life and raising her two children, Amelia and Darragh.

She is a founding member of the 221+ CervicalCheck Patient Support Group, and has selflessly gone public with details about her personal life in the hope that medical and political systems will change.

However, it is in this memoir that she reveals her original story – her current battle with cancer is not her first brush with mortality. Nor is it the first time she has stood at a crossroads, deciding whether to speak and go on living, or to give up and remain silent.

The book is an exquisite mix of the personal and political, adding depth, details and context to a narrative with which the nation is already familiar.

She outlines her early years in Kilkenny, first in Balleygorey and then in Mooncoin. She was the first in her family to go to university, and did her Erasmus year in France, full of hope and dreams.

But while there, she was in a major car incident in which she shattered her pelvis and nearly lost her life. Another friend was paralysed from the neck down, while Phelan’s boyfriend, Christophe, and her dear friend from home, Lisa, did not survive.

Recovering in hospital, she felt despondent. But watching the sun set, she writes: “I made the decision there and then: no matter how hard it would be, I needed to live fully, for Christophe and Lisa, who never got a chance. I’ll do it for them, I thought.”

Later, Phelan visited Christophe’s parents, and the firefighter who saved her life. He seemed unused to praise but, she writes: “Some things are too important to go unsaid.”

Since then, Phelan has continued to meet a number of challenges head-on. Her daughter, Amelia, who was born in 2005, was diagnosed with toxoplasmosis, a disease caused by a parasite that can lead to blindness and brain damage.

When Amelia was seven, she was dancing in front of the fire one evening. With her eyesight compromised in one eye, she did not see a spark that escaped past the fireguard, and her dress caught fire. She suffered severe burns to her upper body and had to spend weeks in hospital before she was able to make a full recovery. Phelan writes: “To this day, it is the hardest thing to talk about. It was the worst thing, of everything.”

In July 2014, at the age of 39, Phelan discovered she had cervical cancer, and it had spread throughout her body. She underwent a gruelling treatment regime and received an initial all-clear in February 2015.

It was in September 2017 that Phelan first found out about an audit conducted by the CervicalCheck screening programme. During a routine appointment, her gynaecologist informed her that the programme had carried out an audit on smears of women who had been diagnosed with cervical cancer. It turned out that the result of her smear test from 2011, which initially came back as normal, was incorrect. “I was motionless for a moment, trying to absorb what was being said … And then a question suddenly came to me. ‘Are there other women in this situation?’ ‘Yes,’ he said.”

Two months later, in November 2017, she discovered the cancer had returned and she was given 12 months to live, with treatment, or six months without it. “I made a decision there and then that I would do anything I could to stay alive.”

In January 2018, during a hospital appointment, she saw her medical file and realised something wasn’t right. She met with solicitors Cian O’Carroll and Siobhan Ryan and they decided to take a case against the HSE and Clinical Pathology Laboratories.

She later writes: “We had no idea then just how big a case this would be – what would unfold in the weeks to come and how many lives would be affected by our decision. Nor could we have known just how big a battle we would have on our hands, or that this very case would shake the country to its core.”

While the final chapter to this story is not yet known, the reader is acutely aware – as Phelan is, no doubt – that there will be no fairytale ending.

Whatever happens, reading the story of this brave warrior and advocate is an honour and a privilege, as it is to share the same bit of Earth as her for as long as she lives.

Liz Farsaci is a journalist specialising in health and legal affairs. She is conducting a PhD study into the Irish maternity services at Trinity College Dublin