Groundhog Day is considered the best example, but it wasn’t the first – or the last 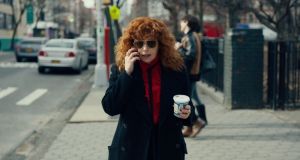 It took 14 seconds of the Russian Doll trailer to give us the first death of its main character. The trailer restarted. So did her night. A minute and several deaths later, it was hard to avoid a grunt of ennui. Yet another “time loop” plot. What could be done that hadn’t been done before, over and over and over and…?

A lot, it turned out. Sure, Russian Doll’s basic premise owes Groundhog Day a generous, Ned Ryerson handshake, but it not only borrows the film’s existential approach to the living-the-same-day-over predicament, it pushes it towards some very dark – and darkly funny – places.

Centred on a superb performance by Natasha Lyonne, whose Nadia is already stuck in “live every day as if it’s your last” mode, Russian Doll explores loneliness, trauma, self-absorption and addiction while navigating its maze of multiple possibilities. It does this with humour, gleeful vulgarity and arresting twists across episodes short enough to demand binge viewing.

So, Russian Doll proves there’s life in the time loop trope yet. Like zombies – another idea that refuses to die – the time loop has shown itself to be a simple yet malleable conceit. It’s comedy. It’s horror. It’s dark. It’s ridiculous. It riffs off the human desire to wipe away mistakes, but adds the torture of knowing nothing you do will matter. It allows for themes of life, society, time, routine, drudgery, dreams and nightmares and the individual’s struggle through it all.

Groundhog Day is generally considered the best of them all, but it wasn’t the first. Among others, the Twilight Zone used a time loop in 1959’s The Shadow Play, Philip K Dick in his short story, A Little Something for Us Tempunauts, and there was a Tom Baker-era Doctor Who story involving a time loop and a very villainous cactus.

But the 1990s saw the tipping point. A few factors fed in to that: the growing awareness of the multiverse – or parallel worlds – theory is arguably one; the rise of video games certainly is.

Games remain the ultimate in time loop entertainment, offering death and resurrection until you finally win. Russian Doll addresses this head on. Nadia is a games developer, teased with the idea her time loops are like a bug in the code. She had even designed a game too difficult to finish because its character keeps dying at the same point.

Recent Black Mirror episode Bandersnatch also centres on a games designer, with death and restart openly referenced across its various timelines. Giving the viewer “Choose Your Own Adventure”-style decision making options, it is TV as a game and almost exhaustively meta. One timeline sees its protagonist horribly aware that he’s being controlled by someone watching Netflix. And like so many games, the button-pushing of Bandersnatch is ultimately more satisfying than the ending.

The 1990s were also crucial for setting story templates. In 1992, Star Trek: The Next Generation’s classic episode Cause and Effect blew up the Enterprise over and over until the crew figured out what was going on. With Groundhog Day following a year later, the two laid out neatly the diverging approaches to the time loop story.

It could be science or existentialism. Puzzle or purgatory.

Contrasting with Groundhog Day’s philosophical fantasy – we never find what causes Phil Connors to repeat the same day, only that he needs to tear down his self-importance and rebuild himself anew to escape – Star Trek’s time loop was a riddle to be solved through ingenuity, techno babble and a convenient plot dynamics.

The excellent Edge of Tomorrow is a great example, and also rooted firmly in the games aesthetic. Character development is rudimentary, with Tom Cruise going from coward to warrior in about 20 minutes, but it’s all so the film can get on with revelling in the inherent frustrations and silliness of Cruise dying repeatedly while he figures out how to save humanity from nasty aliens.

What TV and film generally have in common is that a concentration on a concise time loop – a day works neatly. Variety usually comes in how long they repeat for.

Groundhog Day’s director Harold Ramis said Phil Connors’s day was originally going to last 10,000 years but might have been “30 or 40” years. (He also said that people who work out these things should get a proper hobby.) Doctor Who delved into the potential horror of endless loops in haunting episode Heaven Sent, with Peter Capaldi’s Doctor trapped for a tortuous 4.5 billion years.

Nevertheless, longer loops and grander impacts tend to be found through literature.

Kurt Vonnegut’s Timequake (1997) plunged the whole of humanity into a decade long time loop in which they are doomed to repeat every action and regret a second time around. Claire North’s quite brilliant 2014 novel The First Fifteen Lives of Harry August saw repeated lives overlapping, so that messages could be sent forward from the past and back from the future in a dizzying and inventive plot.

Kate Atkinson’s 2013 novel Life After Life featured central character, Ursula Todd, reliving altered versions of the same life, each leading to the inevitability of the second World War (giving Atkinson a chance to take on the most worn of time travel tropes – “let’s kill Hitler”.)

Reading Life After Life it occurs that the time-loop can serve the writer as much as the audience. All those character possibilities that usually get discarded are given a chance. All those times a writer wonders what would happen if they bumped off a character, if they made them turn right instead of left. And in the end everyone’s happy to rip it up and start again. Why settle for one story when you can have them all?

12:01pm (1990): Actor-you-know-from-everything-in-the-80s Kurtwood Smith is stuck in a repeating hour in this Oscar-nominated short that preceded Groundhog Day. We join him after 40 loops as the despair sets in.

One-Minute Time Machine (2014): Five minutes of fun in which a guy uses a box with a big button to try and chat up a woman. But what’s happening in the world outside the loop?

Portrait of an artist at war: The Burning of the World
8

The poisonous myth: Democratic Germany’s ‘stab in the back’ legend
Real news has value SUBSCRIBE