The ‘Odd Couple’ writer dominated US comedy for 25 years. Then he was left behind 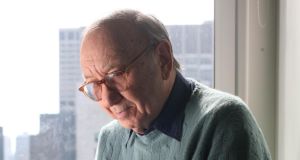 In my high school’s production of The Odd Couple I played Roy, one of slobby Oscar Madison’s poker buddies. For the costume my mother let me pick from among my father’s second-best suits and slightly frayed dress shirts, which worked for the character (I grandly believed) because Roy was an accountant and my father was a banker. No matter that I had to hitch the trousers with a belt and braces to make them stay up; I still got my laughs.

“His refrigerator’s been broken for two weeks,” ran one of my lines. “I saw milk standing in there that wasn’t even in the bottle.” Pow! The play was surefire. That was in 1975; it had not taken long for The Odd Couple to percolate through the soil of American culture, from its 1965 premiere, to the 1968 movie adaptation, to the 1970 ABC sitcom and, in a final burst of glory, to Harriton High. By then its author, Neil Simon, was surefire too: in 1966 he had four hit shows on Broadway at once.

His domination of the field would continue for another 25 years, through Lost in Yonkers in 1991, making him the most successful American comic playwright ever and, for lack of much competition, probably the greatest. But Simon, who died on Sunday at the age of 91, didn’t know he was standing directly over a fault in American culture, one that even as he hit his stride started gapping and would eventually pull him down.

Until then he reliably provided the pleasure of exaggerated self-recognition, reflecting life but with palpable structure and better punchlines. In the theatre the shared assumptions between the playwright and his very homogeneous late-century audience – largely white and urban, often Jewish or at least Jewish-adjacent – had the redoubling effect necessary to raucous comedy. With expert actors (and his plays attracted the best: Maureen Stapleton, Walter Matthau, Nathan Lane, George C Scott, Linda Lavin, Irene Worth and Mercedes Ruehl) those shared assumptions came to seem like common ground.

Only it wasn’t really common ground. The initial bloom of Simon’s success soon soured, at least for critics. In the late 1960s and early 1970s, as independent films were diversifying their outlook and shaking off the formulas of Hollywood storytelling, Broadway boulevard comedies like Last of the Red Hot Lovers and California Suite – tales of the befuddled nouveau riche in a new world – began to look mass-produced and middlebrow.

Simon had a seismograph’s sensitivity to criticism but did not seem to understand the change in the environment. He thought that the diminishing reputation of his plays was a response to their continued commercial success. He tried to adapt to the new expectations, aiming highbrow but missing big with clunkers based on Chekhov (The Good Doctor) and the Book of Job (God’s Favorite).

It was autobiography – and the darkening of his palette – that renewed him. The 1980s trilogy of Brighton Beach Memoirs, Biloxi Blues and Broadway Bound were commercial and critical successes; Lost in Yonkers won a Pulitzer Prize. The strengths of those plays are undeniable, yet to me they seem like transitional works that never transitioned anywhere. They come off as Depression dramas to which someone has added an intermittent and implausible laugh track.

Sometimes, in the way that can happen when writers momentarily grab the tail of the zeitgeist, the laughs in Simon’s plays were even prescient

I prefer the early plays. That’s in part because they literally don’t write them like that any more. The increasing premium critics have put on seriousness – as well as the fractionalisation of the audience into clans with little in common – have almost wiped out the form; the last successful Simonesque comedy on Broadway was Larry David’s Fish in the Dark, a one-off.

But I like those early works – The Odd Couple and also Plaza Suite and The Sunshine Boys, among others – because even though they are comedies they are coherent as drama. The trick was structure: Simon’s sense of the situations he devised was so clear he could write boffo gags that seemed to come not from him but from the character and conflict.

Sometimes, in the way that can happen when writers momentarily grab the tail of the zeitgeist, the laughs were even prescient. This was especially true in plays that addressed, inadvertently or not, the shifting gender roles and politics of the first feminist generation, as experienced by slobs who didn’t know what hit them. When Roy complains about Oscar Madison’s refrigerator he is talking about more than cleanliness. He is talking about the inadequacy of men.

Remember that The Odd Couple concerns two divorcés – Oscar, a sports writer, and a spectacularly fussy newsman, Felix Ungar – who wind up sharing an apartment miserably. It’s a play about the confusion and anger of men who can’t live with women or, apparently, without them. They have no way to see themselves for what they are – dinosaurs – and neither does the play, whose only women characters are a pair of twittery English sisters whom Oscar and Felix attempt to double date.

Yet in all its unreconstructed old-school masculinity The Odd Couple has integrity (making its laughs feel natural) and pathos (making its laughs feel meaningful). Same with Simon’s other comedies of the period. They may be unjust to the harridans, simps and playthings he stocks them with, but they tell a real story of male collapse that was relevant to the culture at the time they were first produced, and they might still hold up better than the later, more “serious” works.

I think I understood that back in high school when, putting on my father’s clothes, I saw how poorly they fit. These kind of men were already under siege, as everyone in The Odd Couple sensed without saying so. Which somehow made the laughs even bigger. – New York Times