Stories of brotherly love, the fractures of marriage and Bell’s palsy 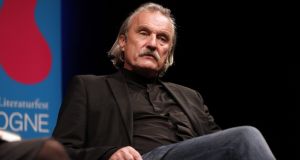 This year looks to be a significant one for the verse novel, that rare hybrid that, though it seems destined for unpopularity, lists a number of unlikely bestsellers among its ancestors. Longlisted for The Man Booker International Prize this year, in the same year that Robin Robertson’s noir verse novel The Long Take has been longlisted for The Man Booker, Austrian writer Christoph Ransmayr’s tale of two Irish brothers who travel to the Himalayas to climb an unclimbed mountain is by turns gripping and moving.

Although not strictly written in verse (Ransmayr’s introductory aside describes the form as consisting of ‘floating lines’), and lacking any strict metre or rhyme scheme, the deftly-handled pace of the novel, its sonic resonances and control of line, make the overall atmosphere one of poetry.

Beginning with the death of one brother in the bitter cold of a snowstorm, The Flying Mountain moves back to chart the journey towards this scene, unfolding a haunting tale, epic in scope, bringing together familial and national histories in a tender and powerfully-observed account of brotherly love. – Seán Hewitt

The Far Side of Happiness
Gerry Boland
Arlen House, €15

If you prefer narratives which are dramatic rather than contemplative, then you will enjoy The Far Side of Happiness, a muscular volume of 16 stories which are well-paced and suspenseful, often with a drop of poison in their tails. Driven by big events and small moments, there is an uncertainty to each, so alongside a predominantly traditional form runs a satisfying edge.

The collection opens with an allegory on depression which is swift and sharp, setting the tone for the whole. Here are glimpses of mid-life, of childhood, of the past catching up, of mistakes, regrets and longings.

Some deal with the fractures of marriage, of the emotional revelations that can occur after years of passivity; others play out variations on affairs, or nearly-affairs, and many, such as Only a Conversation Away focus on “the unspoken longings that have suddenly, shockingly, emerged in to full, blinding view”. From lust to grief, splintered hearts and broken memories, sudden tragedies and slow realisations, these stories aren’t afraid to look at familiar or difficult subjects, which they do with a crafty eye. – Ruth McKee

The life of James Orr, devoted husband and father, reliable employee and responsible neighbour, begins to unravel after he wakes up one morning afflicted by Bell’s palsy. The disease seems to affect how his neighbours, fellow residents’ committee members and work colleagues treat him.

But perhaps they are not the problem – perhaps it is he. There is something Kafkaesque in the way his suburban idyll disintegrates. Maybe the palsy is an outward sign of a deep Jekyll-and-Hyde-type internal divide in him (“the impression of two different faces, two different people, welded savagely together”).

Or maybe he is treated differently because he looks different, reflecting the tendency of society (especially comfortable suburban society) to be suspicious of and hostile to “the other”. – Brian Maye

Perhaps it all boils down to whether you believe an attack of Bell’s palsy could cause a person to disintegrate to the extent that the main character in this short novel does. Tom Lee preserves the veneer of realism well but this reviewer is inclined to remain sceptical.