Expressive Irish hip-hop, a seductive singer-songwriter and the best act of the festival 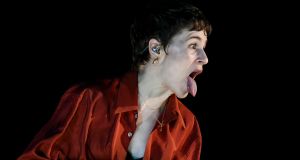 It has been four years since Jessica Pratt released her second album, On Your Own Love Again, so it has been a while since she has been seen or heard around these parts. Welcome back, then, to the California singer-songwriter, who channels Laurel Canyon vibes with individual multidimensional flavours. Her new album, Quiet Signs, is a murmur-soft, seductive piece of work, so here’s a suggestion for you – quiet at the back!

One of the more interesting additions to the Irish hip-hop community over the past year is Nealo (aka Neal Keating), a thirtysomething former hard-core punk singer and law student who remodelled his life after an accident. Nealo’s music is really catching the attention – expressive, self-aware and fluid deliveries of words are underpinned by subtle, jazzy beats. No aggro, no macho – just Nealo.

Chris (aka Héloïse Letissier) knows how to sucker-punch an audience. With a crotch clutch running in parallel with body-popping choreography, the pansexual French synth-pop songwriter delivers a vivid, focused stage show while performing incisive, carnal and stimulating genderqueer-perspective songs. Frankly, everyone else playing at Electric Picnic might as well give up now.

It may have taken The 1975 10 years to break through commercially, but since their 2013 self-titled debut album, any lost time has been quickly made up. Their third album, A Brief Inquiry into Online Relationships, established The 1975 as (so says NME) a millennial version of Radiohead. With a visually arresting show and some cracking pop songs, you might need to hunker down for this one.

Liverpool’s Echo & the Bunnymen – aka two core original members, Will Sergeant and Ian McCulloch – are the Electric Picnic heritage band that a certain demographic will gladly sing along to. From 1980-88, the Bunnymen’s batch of hits (including A Promise, The Killing Moon, Seven Seas and Bring on the Dancing Horses) established their post-punk durability and confirmed McCulloch’s status as one of rock’s most striking frontmen.

Kevin Bacon: ‘I was incredibly cocky and unwilling to take any advice’
9