The Script review: So Irish it hurts. They would bleed a tricolour

For all The Script’s bland posturing at 3Arena, there is no doubting the genuine passion beneath 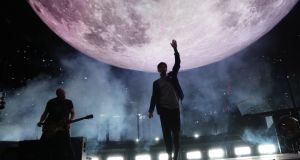 The Script on stage at the 3Arena, Dublin, on Thursday. Photograph: Crispin Rodwell/The Irish Times 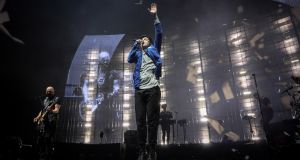 The Script on stage at the 3Arena, Dublin, on Thursday. Photograph: Crispin Rodwell/The Irish Times

The Script are so Irish it hurts. There is the feeling that the trio would bleed a tricolour if called for. As the giant moon rises above the stage for this, the first of three nights in their hometown, Danny O’Donoghue arrives on stage, his pose part pugilistic part preacher, to receive their applause. Bursting into the soaring Superheroes with a matey “What’s up Dublin?”, there’s a blunt professionalism to their introduction; it’s heads down business as usual as they charge into the eternal radio-smash Talk You Down.

Confetti canons emptied, stage chatter turns to finding a “good cup of tea” and their love of chippers, before O’ Donoghue repeats the now common social media maxim: “In a world where you can be anything, be kind”, before launching into If You Don’t Love Yourself (echoing RuPaul’s catchphrase – minus the wig).

The Script possess an earnestness that we, on the surface, should be uncomfortable with, a sunny optimism that seems out of step with the traditional national psyche of cloudy disgruntlement. Their songs are packed full of embarrassing California self-help jargon that usually clog up irritating Instagram accounts.

O’Donoghue, with his beaming smile and heartfelt patter, is a beguiling mix of a canny wellness guru and an empathetic motivational speaker, asking if we “feel the vibe” and speaking of The Script “tribe”. As he doles out proverbs and cliches, it wouldn’t be surprising if there was a song called Live, Laugh, Love lurking in their back catalogue.

Although for all their broad themes and bland posturing, there is no doubting that there is a passion beneath that is genuine. Guitarist and songwriter Mark Sheehan implores that “Every single song is based on reality and if you love it, you feel it too.” Their chart-busting anthems about reaching your lowest ebb and reviving yourself have a relatable ordinariness that the crowd, packed full of not just fan girls & boys but entire families – including captivated grandmothers – can latch on to.

The Script: Live in Dublin

The best photos from their Dublin concerts View Now

O’Donoghue is all about “engagement”, bounding around the stage like a kid who’s swallowed too much Pick n’ Mix, as he and Sheehan live out boyhood fantasies mixing House of Pain’s Jump Around with their own Good Ol’ Days, spreading the Patrick’s Day pomp a week early, with the singer finishing the song by diving into the crowd and stealing a camera to film this homecoming.

This full-on audience participation reaches its apex with the band involving themselves in the love life of fan Emma, who offers up her phone for the frontman to call her ex (on Facetime, natch) and bellow heartbreak hymn Nothing to a bemused, if not terrified Cian. This may be the ghosting heard around the world.

In a notoriously risky business, The Script feel entirely safe. They exist in a cloistered radio-friendly universe populated by the likes of Ed Sheeran & Lewis Capaldi, inoculated from innovation or the avant-garde, which is just the way their audience likes it. At times they could be mistaken for a more compassionate Maroon Five, with the by-numbers cod reggae of No Man is an Island showcasing them at their most anodyne.

The most effecting moment of the show comes when the band strip things back completely, appearing in an upper block of the venue performing new track Run Through Walls acoustically among the crowd. This feeling of intimacy, free from “digital hearts” as O’Donoghue puts it, is a truly sentimental display that belies their somewhat perfunctory slickness.

After a thunderous rendition of The Man Who Can’t Be Moved, the singer’s voice cracks as he acknowledges that the crowd are “real people going through tough times, real people that stick together”.

The crowd swoons to the anthemic encore of Breakeven and unlike the icy and removed reaction mere nights ago from the 1975’s Matty Healy, the band practically invite and encourage the rudimentary chorus of “Olés”, collecting them like a wave of warm hugs.

The critic-proof Mrs. Brown’s Boys of pop will always be uncomfortably sincere for some but as the crowd erupts into a spontaneous repeated cry of “Oh these times are hard” after finale For the First Time signals the end of the night, it’s clear that The Script offer the faithful a curious kind of hope in an irony-filled musical landscape.

Bloody Sunday 1920: Who were Michael Collins’s hit team ‘The Squad’?
9