What’s Ireland’s favourite Christmas song, we wondered. So we asked you . . .

Almost 3,000 people on Twitter returned a clear winner from a four-strong shortist

Almost 3,000 people on Twitter returned a clear winner from a four-strong shortist. 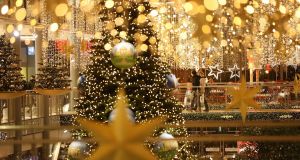 The Irish Times has decided to embrace the Christmas music dirgefest. Photograph: Getty

It’s the most wonderful time of the year when people across the land start decking their halls and dreaming of white Christmas and maybe even wishing it could be Christmas every day.

Rather than escaping the musical dirgefest, The Irish Times has decided to embrace it. We have tuned in all our radios to Christmas FM and have been singing along to Do They Know Its Christmas with gusto all week.

We received hundreds of responses.

“Penneys, have a whole lot of things for Christmas, have a lot for the family,” trilled Patricia McQuillan in an early tweet that both completely misunderstood and absolutely nailed the nature of our search.

“Christmas in Hollis by Run DMC,” said Joe Griffin. “It’s my favourite because it’s a nice mix of brash and sweet, it’s a rare Christmas pop song that’s about ordinary modern families, and it’s by *far* the best Christmas song to dance to.”

No one else was on his team.

Síle Seoige was alone in picking Judy Garland’s Have Yourself A Merry Little Christmas and largely isolated in her choice of Joni Mitchell’s River, although she did admit that pick was “slightly alternative perhaps”.

Stefanie Preissner stood apart from the field too as she provided proof that Christmas songs don’t just belong n the past. She nominated Sia’s new song Candy Cane Lane, which, she said - in a tweet that informed us and made us feel ancient - is “the xmas anthem of a generation”.

One person mentioned Chris de Burgh, but the man who really seemed to put the Christmas into Chris was that Rea chap.

“Driving home for Christmas . . . invariably comes on the radio every year as I leave Dublin for Offaly . . . for me that’s when Xmas really begins,” said Helen Lalor.

“Christmas doesn’t start for me til I hear Chris Rea. The imagery in the song is fantastic and the music too. Perfect,” said Aidan Sommerville.

Clare Grady was all about the nostalgia when she went with Jona Lewie’s Stop the Cavalry. She told us she “had just moved to Dublin, sharing flat with friends, it’s the soundtrack to our first Christmas shopping on Grafton St, Switzers window, buying Indian dresses in Shree, Blue Grass perfume in BTs”.

Sorcha McNally agreed with that choice. “It reminds me of working as a nurse in London over Christmas,” she said.

Sadhbh Goodhue started off all high brow by citing “an album of medieval carols that I play every year when I’m putting up the tree. The Wassail Song is my absolute favourite.” She then return to the mere mortal’s plane by adding: “On the other side of the coin: my secret shame is I also love Mariah Carey’s All I want for Christmas.”

Chloe Moloney went for Wham’s Last Christmas. “I remember watching it on the Den when I was a little ‘un so it’s very much part of childhood Christmas memories. I love the sheer unbridled 80’s-ness of it, George’s vocals and that video. Perfect. Once I hear it, it's officially Christmas.”

“Can’t believe Wizzard hasn’t got a mention for I Wish it Could Be Christmas Every Day. Classic,” said Paddy Murray. He also voted for It’s Christmas Time by Status Quo and only redeemed himself by mentioning O Holy Night - the Mario Lanza version.

“I can’t bear O Holy Night any more because I cry too much,” said our own Joyce Hickey. “So, carol-wise, Once in Royal David’s City. And song-wise, to draw a distinction, it’s Fairytale of New York. (Do you think you’ll ever get to sing Galway Bay with the boys in the NYPD choir?)”

It will hardly come as a surprise to read there was a lot of love for the Pogues tune.

After a couple of days of frenzied debate, we decided there could only be one winner so we organised a Twitter poll feature the most frequently mentioned songs.

We had to limit our choices to just four - which meant Bing Crosby and David Bowie’s Little Drummer Boy/Peace on Earth classic missed the boat but only just.

Based on mentions, the final four were Driving Home for Christmas, Stop the Cavalry, Fairytale of New York and O Holy Night.

Almost 3,000 people cast a vote in just 24 hours. It looked for a while like it was going to be a close run thing, but in the end Fairytale of New York pulled away and finished a long, long way ahead of the chasing pack with 46 per cent of the vote.

In second place was O Holy Night on a respectable 28 per cent, while Driving Home For Christmas was took the bronze medal with a share of 18 per cent. Poor Jonah Lewie was stopped in his tracks early doors and finished on just 8 per cent.