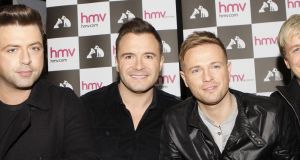 Westlife have announced they have reunited and plan to embark on a stadium and arena tour next year, along with releasing a new album.

The group shared a short video on Facebook and Twitter to confirm the news that they had reunited.

The reunion means the group will play their first concert since their farewell shows in Croke Park in 2012 and release their first new album since 2010’s Gravity.

The group, comprised of Kian Egan, Nicky Byrne, Mark Feehily and Shane Filan, said former bandmate Brian McFadden, who left the band to embark on a solo career, would not be joining them for the reunion.

McFadden has recently been touring with Boyzone star Keith Duffy as Boyzlife.

Since the group split, Shane Filan has released three solo albums, Nicky Byrne has presented a show on RTÉ 2FM, Kian Egan has appeared as a judge on The Voice of Ireland and Mark Feehily has released two solo albums.

A spokeswoman for RTÉ said Byrne had made station management aware a number of months ago about a potential Westlife reunion and that for the time being it would be “business as usual”, with him remaining at the station.

“2FM will announce its plans in the new year,” added the spokeswoman.