How Scandinavian pop princesses took over the world 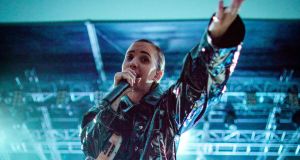 Sigrid, Tove Lo, Tove Styrke, Astrid S, Alma, MØ, Icona Pop, Zara Larsson, Seinabo Sey, Aurora. Recognise any of these names? You should. A wave of Scandinavian talent is sweeping pop charts around the globe in recent years, and these are just some of its freshest faces.

Though the Scandi sound never quite left us – Sweden’s Robyn is one of the last decade’s most influential pop legends, and has just released a new solo single, Missing U, after an eight-year hiatus – this recent explosion of new names feels unprecedented. Scandipop is reinventing itself, and making its presence felt.

Lykke Li is one of Scandi music’s household names. Also from Sweden, the dark indie artist began her career a decade ago, and since then has dropped a string of critically-acclaimed albums – though she is perhaps most known in pop charts for her single I Follow Rivers, which went to Number 2 in Ireland. Still going strong, her most recent album So Sad So Sexy came out this summer, but over the phone Li tells me she feels like “the grandma” of today’s Scandi scene.

“I live in LA now and I’m a bit removed from it, I’m not really in the scene anymore,” she confesses. “But for me, the Scandi influence goes back to ABBA. Some of those songs are timeless pieces in the way they’re so orchestral. I also think of Max Martin and Ace of Base.”

ABBA’s incomparable pop legacy hardly needs explanation: Mamma Mia: Here We Go Again is storming cinemas more than 30 years after their break-up. Less immediately obvious to the pop layperson is the impact of Max Martin; the Swedish songwriter and producer has written 22 US number ones – including Taylor Swift’s Blank Space and Katy Perry’s I Kissed a Girl. Through him and other producers, Scandinavian artistry has maintained a subtle and enduring influence on global pop.

“Now, I don’t know anything about the new sound,” Lykke Li prefaces. “I can only talk about the old sound. But I think that there’s a darkness and a shimmer to it when it’s done right. It’s very melodic. Even if you look back to Swedish lullabies and Christmas songs, they’re extremely beautiful in a really melancholic, sad way. I think that’s what we’ve grown up with.”

I think we have a tradition of making raw, emotional, well-crafted music

Tove Lo’s grunge-inspired drumbeats are usually described as “dark pop”, and the synth-heavy dancefloor sounds of Robyn are coupled with pining lyrics. This bright melancholy is in the DNA of Scandipop, ever since the smiling pain of ABBA’s Slipping Through My Fingers. Maybe this exquisite juxtaposition is the formula that has kept Scandi music at the forefront for decades.

“I think all the best music in the world has something in common – it brings out emotion in people,” Li continues. “I think we have a tradition of making raw, emotional, well-crafted music.”

But if this tradition has always been a part of Scandipop, what’s actually changing, then? What accounts for this recent explosion of Scandi names in international charts? “Well, that’s just globalisation – it’s Spotify,” Li offers. “People have access to music in ways they didn’t have before. It’s just the modern world,” she concludes.

Maybe she’s right. Or maybe there’s something more to the story.

A week after our phone conversation, I’m in Oslo, Norway, where Lykke Li is headlining Øya Festival. It seems all the established pillars of Scandipop thus far – ABBA, Robyn, Max Martin and Li herself – hail from Sweden. Some new names do too: Tove Lo, Tove Styrke, Icona Pop. But increasingly, we see new success stories emerging from Norway, such as Sigrid, Aurora or Astrid S. Here at Øya, there seems like no better place to determine if Norway, and not just Spotify, has a significant role in the Scandi reinvention.

MYRA is a rapper from Bergen, a small city of a quarter million people on Norway’s southwestern coast. Sitting under a canopy on a particularly hot day at Øya, she speaks to me in crisp, fluent English – but she chooses to rap in Norwegian. “I love the Norwegian language,” she tells me. “I think it’s really romantic, I’ve always felt very creative in it.”

This patriotism is balanced with a pandering to the current chart palette.

Sigrid feels like something new again maybe, she doesn’t have such a cold soundscape. It’s kinder, warmer pop

“Aurora is from Bergen too, and Sigrid’s been living there. The rap scene is really huge in Bergen right now. It’s a really cultural city, like a tiny Berlin. We grow up with a lot of art and music,” MYRA gushes cheerily. It seems the Scandi zeitgeist is expanding beyond Stockholm and into new cultural hubs in Norway, tapping into a well of young talent in the process. Lykke Li may be right about globalisation having an effect after all.

“I think the new Scandipop is that sort of synth-based, cold sound with lots of vocal effects, we’ve seen that wave in Norway for a while now,” Sofie Tollefsbøl tells me from her poolside perch in the Øya press area. She’s the frontwoman of Fieh, a nine-piece pop band from Oslo. “I think that Susanne Sundfør” – also Norwegian – “opened up that sound and people followed after.”

She continues: “Sigrid feels like something new again maybe, she doesn’t have such a cold soundscape. It’s kinder, warmer pop.”

MYRA mentioned how it’s no longer just ABBA’s pop having an influence, how other genres such as the underground rap scene are shaping the sound. Tollefsbøl echoes this analysis: “Look at Sassy 009,” she gestures, referencing a Nordic pop trio in the Øya line-up. “They do, like, house music, with a flute! I would never have expected that to come from Norway.”

What else is new about Scandipop then, I ask. Why are there so many young Scandinavian women appearing in global charts? “Well, maybe it’s Scandi-feminism,” Tollefsbøl laughs, punching the air. Her chorus in Fieh’s first single, Glu, repeats “All these old men cannot tell me what to do” on a catchy loop.

Later, I drift off to see Smerz (a female Norwegian duo producing nocturnal dance beats) play a memorable set. At one point, they roll out two exercise machines which the crowd assumes they’re about to mount. At the last moment, two oiled-up, muscle-bound, blonde men appear instead, to sweat their way through the background of the track while the singing duo remain at their decks, smiling to themselves. The raw sex of it all resonates strongly with the female gaze of contemporaries like Tove Lo and her recent track B*tches. Sofie’s “Scandi-feminism” remark floats back into my mind as the crowd grins along. It’s one of the best sets of the festival.

It feels like Scandipop’s rapidly swelling profile can’t be traced to any one cultural phenomenon. It is succeeding precisely because it is diversifying. Its expansion in the global charts is symbiotically linked with its expansion into new cities, new genres, new art forms, new political movements. The last person I meet at Øya is Halie, Norway’s youngest pop sensation. At only 17, she’s already made waves with pop bangers Echo and Youth, addictive fare to rival Sigrid’s listenability. As she succinctly puts it, the future of Scandipop lies in this new “freedom” to tap into whatever is inspiring.

Norway is becoming a new hub, as Oslo’s fashion world, Bergen’s rap scene, globalisation, feminism and countless other influences are reshaping the sound and soul of Scandipop. Stockholm is no longer the whole story. As Lykke Li summarises at the end of our call: “Good music is good music. It doesn’t matter where it comes from.”