Classical concerts of the week, from Louis Schwizgebel to Marc Coppey

Plus: Don’t miss soprano Claudia Boyle’s showstopper in The Tales of Hoffmann 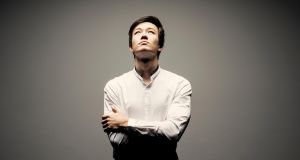 The Tales of Hoffmann Town Hall Theatre, Galway €30/€27 irishnationalopera.ie; also Letterkenny, Thurs; Sligo Sat Soprano Claudia Boyle and director Tom Creed have turned the Doll’s Song in Irish National Opera’s new production of Offenbach’s The Tales of Hoffman into a vocal and theatrical tour-de-force. Boyle has always been excitingly daring in the vocal stratosphere, and here, as Olympia, she is also called upon, in designer Katie Davenport’s futuristic costume, to move with the finely geared smoothness of an advanced robot in a science-fiction blockbuster. She adapts with apparent ease to her three other roles, which also give her further virtuosic challenges to surmount. The other principal roles are well taken, and conductor Andrew Synnott gets plenty of colour from the small ensemble. But it’s Boyle’s showstopper for which this production will be remembered.

The Leonard Bernstein centenary features in the RTÉ National Symphony Orchestra’s latest all-American programme, under Spanish conductor Jaime Martín. The ballet Fancy Free, choreographed by Jerome Robbins, was written in 1944 and first performed at the New York Metropolitan Opera when its composer was just 26. George Gershwin was only 25 when he gave the first performance of his Rhapsody in Blue with Paul Whiteman’s band in 1924. The NSO’s soloist is the highly-regarded Swiss-Chinese pianist Louis Schwizgebel. The Concerto for Orchestra by Béla Bartók was first heard in the same month as Fancy Free, when the composer, a forced emigrant from Europe, was 63. He died the following September, and didn’t live to see the full success of what would become his most popular orchestral work.

Luisa Mac Conville’s Sligo Con Brio concert series, now celebrating its 20th anniversary, continues with a solo recital by French cellist Marc Coppey, whose connection with Ireland goes back to 1990, when he first played here in an ensemble with a fellow countryman, pianist Philippe Cassard, then at the peak of his popularity in Ireland, as the winner of the inaugural Dublin International Piano Competition in 1988. Coppey’s Sligo programme consists of three peaks of the solo cello repertoire, the First and Fifth Cello Suites by Bach, and Kodály’s gloriously individual Solo Cello Sonata of 1915, which many people feel to be the first solo cello work since the 18th century worthy of being placed alonside the suites of Bach.

Duffy says she was ‘raped and drugged and held captive’

The Year Without Summer: a vision of climate upheaval seen through the past
7

Blood: A disappointing journey into the Irish psychosphere
Real news has value SUBSCRIBE