U2 at the 3Arena: Is Ireland suffering from U2 fatigue? Not a bit of it

Review: Both band and audience were determined this would be a night to remember – so it was 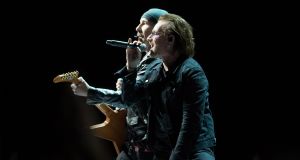 A hometown concert by U2 used to be an occasion to cherish for ardent Bono watchers. But by the time the band close the Dublin run of their Experience and Innocence tour they will have played the city nine times in four years (not counting the frontman’s Christmas busking sorties with Glen Hansard and chums). The question of how much Bono is too much Bono presents itself.

With this week’s quartet of dates selling out in a heartbeat, it would be preposterous to claim Ireland is suffering from U2 fatigue. As the line of fans that snaked around the venue from early morning testifies, they remain wildly beloved – a generation-defining rock band still a way off from calcifying into a museum piece.

Bono emoting beneath a giant video rig is nonetheless becoming rather a familiar sight. The déjà vu is accentuated by the fact that, as per the title, Experience and Innocence is essentially a grandiose remix of the Innocence and Experience shows – see what they did there etc etc – the group brought to 3Arena in 2015.

They have resurrected the huge “barricage” – a Blade Runner-esque screen extending into the audience. Its purpose is twofold: to frame the band in epic visuals and to dim into dramatic darkness, the better to conjure an atmosphere of intimacy in the 14,000 capacity room (which counts President Higgins among attendees).

Dublin’s biggest musical exports famously/notoriously spent the 1990s dallying with irony, whilst giving the impression they had never entirely worked out what they were being ironic about (ironic, that). They’ve devoted the intervening years to reconnecting with their fervent younger selves, a mission that continues at the docklands venue.

U2 achieve their objective with a performance that feels like the best sort of homecoming – one brimming with warmth and a determination, on the part of both band and audience, that this is to be a night to remember.

Welcomed on by the unlikely strains of an obscure Noel Gallagher song (they’re mates but come on), it’s straight down to heart-on-sleeve business with the unapologetically sincere The Blackout. Here is one of the more engaging tracks from their politely-received latest album Songs of Experience (if you bung cotton in your ears the record sounds like Achtung Baby having a love-child with War).

It finds Bono ruminating on stardom and mortality – he has spoken mysteriously about a near death experience in late 2016 – and how far he has travelled since he was a scrappy northsider with a statement mullet and a head full of dreams.

His reflections in Dublin extend to a surreal anecdote about being cold-shouldered by London record company executives “up the road” at the Baggot Inn, leading to an out of body encounter with Jack Charlton on Grafton Street. “He said ‘one day you’ll play for Ireland’. And here I am, playing for Ireland.”

Do not adjust your mirrorshades, Bono is telling a dad joke.

More of the same is to follow (minus the dad jokes). Having toured the Joshua Tree through 2017 – including a sold-out Croke Park date – the band conspicuously gloss over what is arguably their landmark album. In its place are half a dozen tracks from Experience – each a serviceable approximation of U2 in their 1980s pomp (the LP could have been called “I Can’t Believe It’s Not War”) .

But it’s the classics that set the room ablaze. Vertigo is reprised by the four musicians on a candycane stage before the old Bono MacPhisto character pops up to say something nice about Michael D Higgins.

On Beautiful Day the production, by contrast, is stripped down so that it’s just Bono, the Edge, Adam Clayton and Larry Mullen Jr, stage, band and audience united in belting their hearts out.

Bono being Bono, the Experience and Innocence tour has not lacked for politics. He urged Britain not to turn away from Europe during their London gigs – the British press duly rolled about scoffing – and in New York waxed about the American dream (and the implicit threat posed by Donald Trump).

Here he comments on the marriage equality and repeal referendums. “We used to look to America, he says. “But this year they look to us.”

He also addresses Brexit: "Whether there’s a hard border, soft border or no border at all... we have truly great people representing us on this island.”

As with so much else involving U2, it’s earnest, predictable and makes all the hairs on your neck stand up. In other words, it’s U2 doing what they’re best at – bashing out anthems that almost fall over themselves in their desire to connect but which nonetheless pluck at the heartstrings with irresistible fervour.

If there’s a lesson it’s that familiarity breeds contentment and the best kind of catharsis.