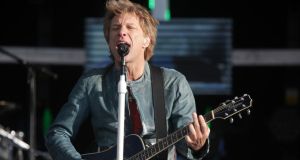 Jon Bon Jovi on stage with the band at their Slane Castle concert in 2013 Photograph: Arthur Carron/Collins

The band will bring the European leg of their This House is Not For Sale tour to the same venue in which they played two sold out show in 2011. The tour is to promote the release of their latest album of the same name.

📢 .@BonJovi 'This House Is Not For Sale Tour' comes to @TheRDS Arena, Dublin on Saturday 15 June 2019 🙌#Tickets on sale Thursday 8 November at 9.00am https://t.co/suYAEZ23Gy pic.twitter.com/aeJiHDxAv2

Jon Bon Jovi said, “we’ve become a new, rejuvenated Bon Jovi. We are out there as a band, feeding off each other and the fans, having the time of our lives all over again.”

Tickets go on sale at 9am on Thursday, November 8th from Ticketmaster Ireland.