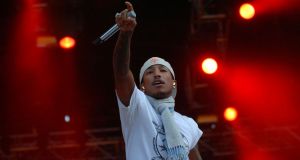 Pharrell Williams has warned US president Donald Trump not to use his music at rallies after the president played one of his songs hours after a mass shooting at a synagogue.

Robert Gregory Bowers is accused of killing 11 people in an attack in Pittsburgh on Saturday in what is believed to be the deadliest attack on Jews in US history.

Hours after the shooting, Mr Trump played Pharrell’s Happy during a rally in Indiana. The US musician has now expressed his anger at the move and issued a cease-and-desist letter through his lawyer.

The note, from Los Angeles-based lawyer Howard King, states: “There was nothing ‘happy’ about the tragedy inflicted upon our country on Saturday and no permission was granted for your use of this song for this purpose.”

...This evil Anti-Semitic attack is an assault on humanity. It will take all of us working together to extract the poison of Anti-Semitism from our world. We must unite to conquer hate.

Mr King adds that Pharrell has not and will not grant Mr Trump permission to use his music and that use of the song Happy is a copyright and trademark infringement.

Mr Trump called the synagogue massacre an “evil anti-Semitic attack” that “is an assault on all of us”.

Bowers, a 46-year-old lorry driver, appeared in court on Monday in a wheelchair and handcuffs. It is alleged he was shot and wounded during a shootout with police at the Tree of Life Synagogue in Pittsburgh, Pennsylvania.

If convicted, Bowers could face the death penalty. The 11 victims ranged in age from 54 to 97 and included a husband and wife.

Pharrell is not the first artist to demand Mr Trump not use their music. Earlier this month, Prince’s estate warned the president about playing the late popstar’s hit Purple Rain at his rallies.

Aerosmith frontman Steven Tyler filed a cease-and-desist letter after the president played his song Livin’ On the Edge at a rally.

The Rolling Stones also took issue with Mr Trump using their music after he played Start Me Up at an event. – PA

Amybeth McNulty: the Donegal teenager who stars in ‘Anne with an E’
6