Top of the Pops was the perfect pop show: its return should be a triumph

The BBC is to launch a new Top of the Pops-style show. Here’s why the original was more than just a music programme 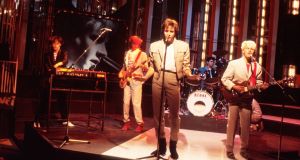 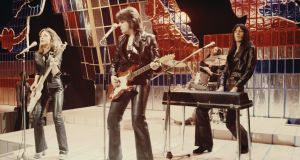 Suzi Quatro and her band on the Top of the Pops Christmas Day edition in 1973. Photograph: Michael Putland/Getty Images 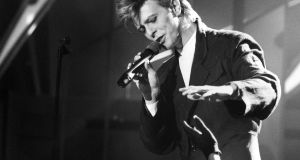 Thursday evenings were sacred in our house growing up. It was the night of the week that my mam did the “big shop”. While I was busy attempting to slyly load the trolley full of Yoplait frozen yogurt I was also conscious that we had to get home before everyone planted themselves in front of the telly (I was usually lying on the floor in anticipation) for Top of the Pops.

Pop music was a serious business for me and my sisters. We grew up in a house where the sound of the radio was the constant background noise. Posters of our idols covered our bedroom walls and sometimes crept downstairs and were stuck up in the hallway.

Saturday mornings were the smell of rashers sizzling in the pan mingled with the sounds of Cathy’s Clown by the Everly Brothers, early Beatles or vintage Nat King Cole. Sunday dinners were spent with Larry Gogan belting out the hits from Jacko to Queen, punctuated by his infectious laugh. It was the most cleansing ritual after mass: it was my church.

When the pencil-drawn Morten Harket pulled the sad-faced café girl into his comic strip in the video for Take on Me, it is no exaggeration to say it blew my tiny mind. It is still the best metaphor for pop music in all its transcendent glory. Pop can transport you to a different world, one of instant excitement and glamour, the ultimate escapism. It was also the reason I climbed into the household bin on more than one occasion, aping the tragic ending to the video, as the girl is flung back into cruel reality, surround by the detritus of daily life, minus Morten and his regulation Nordic cheekbones.

The one thing that broke the monotony of the grey school week was the promise of this brief holiday to the glittering world of music for a half hour every Thursday with Top of the Pops. In the pre-internet age, it was the only time you’d get to see your beloved pop stars in the flesh, wearing clothes that were different from the Smash Hits pictures you obsessed over, or the videos you’d seen glimpses of. Witnessing Duran Duran’s Nick Rhodes pouting in peach lipstick while perched behind his keyboards as John Taylor strutted around the tiny chrome stage, kicking balloons into the mob of screaming girls, was the closest you could get to seeing them in concert.

One of my earliest memories is sitting on my mam’s knee entranced by the sight of Freddie Mercury swishing regally around the stage, flirting outrageously with the camera, an intoxicating combination of decadence, anarchy and control, the sizzling keyboards of Radio Gaga (he was speaking my baby-language) firmly imprinted on my soul.

Top of the Pops was fantastical: it could have been filmed from inside the Doctor’s Tardis for all we knew. It didn’t look like anywhere that could exist in dull Ireland. It was full of flashing lights, mirrored floors and abundant smoke machines: a studio in the legendary “London”, a mythic place where all popstars lived. It was brilliantly egalitarian: once an act was in the charts somewhere, they could appear on the show, which led to a true pick’n’mix that could cause vicious arguments, as serious Smiths fans were forced to endure the wine-bar soul of Paul Young before they could see Moz twirling around brandishing his gladioli like a weapon.

As most houses only possessed one telly it was also a place where parents were exposed to the hits of the day, grumbling over their newspaper about the crude glamour of Pete Burns, shocked by the beauty of Marilyn, or the shambolic performance of the Happy Mondays, terrified by Bez’s goldfish fizzog gurning into the camera.

Most fabled pop memories written in memoirs and biographies talk in revered tones about David Bowie’s Top of the Pops performances, how he seemed like an alien life-form who appeared to save them from suburbia. A tea-time pop show completely altered lives because it was there and it reached everyone, unlike the solitary world of You Tube it was a unifying force, one that fuelled daydreams and future desires. It was dissected in hushed voices in school the next day; it presented your idols in the most straight forward manner; it was meaningful in a way that the zombie-rotated videos of MTV couldn’t be because it had the extra added air of unpredictability.

After it’s true golden age in the 1970s and 1980s where it reached record high audience figures of 15 million, there was a changing of the guard, with “serious” music being the order of the day. Britpop was just bubbling under the surface and there was a call for the poptastic art of miming to cease. The desire was to turn Top of the Pops cutting edge, a show that The Clash would have wanted to appear on. Instead of transforming it into a teenage boy’s bedroom, it turned these ever so indie artists more pop: these weren’t the faux-shy shoe-gazing C86 kids of Sarah Records; these were ambitious bands who lusted over fame, sick of the indie-ghetto, who were more than ready for their close up.

With producer Ric Blaxhill at the helm, this era of Top of the Pops pushed these bands into the mainstream and gave us iconic turns from the likes of Suede, Super Furry Animals, Pulp, Blur and Oasis, not to mention the controversial Manic Street Preachers performance of Faster with lead singer James Dean Bradfield donning a balaclava with his name emblazoned on it like a terrorist dressed by his mam.

To see all this unfold on terrestrial telly weekly was a joy. It gave us tiny bits of the best of pop culture in real time. When the show was officially cancelled in 2006 it was the end of an era. Pop had sliced cut itself up like pieces of sushi to be consumed individually online. Kids didn’t need to gather round the telly to see their faves backflip to their latest song; it had already been beamed into their eyes and ears as soon as the song was written in the studio. They had the clips, they’d remixed a version themselves by lunchtime, and they were bored of it already. Pop as we knew it was cancelled. It was replaced by Jools Holland, who managed to suck all the fun out of it. His boogie-woogie muso dungeon was not the place for one hit wonders like Whigfield unless she decided to go full Joni Mitchell mewl-folk.

In the absence of a show like Top of the Pops we’ve missed out on would-be brilliant performances from popstars who’ve cropped up in the intervening years. We can only imagine what Lady Gaga would have cooked up for Bad Romance or if Daft Punk would have appeared in a spaceship, and would Kanye have done a swear?

The good news is that after an 11-year hiatus the BBC has decided to bring pop back to the telly. It has announced that a six-part music series will be broadcast live this autumn on BBC1, although unlike Top of the Pops it will also feature sketches and interviews, making it more akin to ITV’s noughties pop show CD:UK. It doesn’t really matter what shape it takes once it’s there, once it’s still a space where fans can obsess, social media can scoff and pop can worm its way back into the top position in our cultural lives, right where it belongs.