The 6 best new Irish tracks of the week 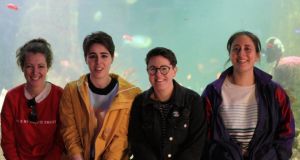 The song that kicked it all off for the Mullingar band gets a re-recorded version in a real studio after being road-tested live and played for over two years. It still sings with teenage possibility.

Sal Dulu - Antasma Sal Dulu is a little-known Dublin producer and Antasma is an impressive introduction, a beat production given extra imagination by a twisting vocal sample, some guitar funk tones and roughed-up distortion.

The voice of Blooms’ Louise Cunnane with production by Simeon Rodgers keep the confessional alt-pop fire burning with the debut track from their new project which centres around the fracture point of a dissolving relationship.

A video that takes place at “a radical left queer educational programme for children?” hosted by Snotsey-May Darcy? RTÉ are a long way off commissioning that. The all-girl pop-punk band Pillow Queens live out the leftist agenda until then with the video for their memorable new single.

Built primarily for a live dance setting, the Dublin duo of Cayisha and Daz take influences from house music, soul and disco to create exalting higher-states electronic music, as heard on their recent People In Glass House EP. Catch them in a live setting at festivals like Electric Picnic and Castlepalooza in the coming months.

ALBUM OF THE WEEK The Jimmy Cake - Tough Love

The Jimmys are among the longest-standing alternative groups in Ireland but they’re not prolific by any stretch of the imagination. Their output is considered and toiled over, their personnel changes frequently and their predilections morph. Their fifth album Master took seven years to arrive and marked a change in tone with elongated post-rock and kraut electronics. Tough Love arriving two years later, tears down their sound and is more focused on the process of building it all back up again. At 40 minutes and one track, Tough Love grows from synth atmospherics to a full-pelt psychedelic chase, to a dirge of noise and a piling lament of sonic layers.