Has Tyler, the Creator come out on his new record? 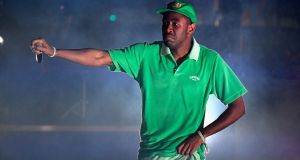 Flower Boy might lack the raw power of some of Tyler’s first batch of tracks, but it reestablishes why we need him out here right now

Odd Future Wolf Gang Kill Them All could barely have scorched the Academy with any more heat if they’d doused the stage in kerosene and sparked up a match. It was August 2011 and the brattish young Los Angeles hip-hop collective were right at the cultural zeitgeist, unleashed on Dublin with no rules, directives or adult supervision.

The show was complete madness. The battering bass and drums that underpin Odd Future’s vicious beats turned the venue into a swimming pool-sized mosh pit. The performers climbed up equipment to reach fans on the upper tier. Each member did about 17 stage dives each.

Group comandante Tyler, the Creator made a gnarly leap into the crowd – even though his foot was strapped up after he broke a bone diving off a speaker in LA a few months previous.

On Radical, Tyler led the chants: “Kill people, burn shit, fuck school!” A ridiculous statement when you stare at it in stark typeface, but when blasting out from the rapper’s gruff vocal chords, it’s a call of teen rebellion – a mantra that was probably scrawled on a million school copybooks. Compile a list of music that parents never want their offspring absorbing and Odd Future would be near the top.

The group emerged during an era of millionaire rappers overseeing hip-hop from midtown Manhattan corner offices. Odd Future rattled the genre by bringing belligerent, balls out, DIY punk energy. Their shows had a giddy feel, like most of the crowd had been dropped off in their dads’ cars and allowed off the parental leash for the very first time.

Guys like Hodgy Beats, Left Brain and Domo Genesis were fair rappers, but Tyler was the world they all orbited. He produced most of the music, which leaned on schlocky horror movie-style beats, jazzy minimalism and the spirit of his hero Pharrell Williams.

For better or worse, Tyler’s violent lyrics were one of the defining ripples of the group’s oeuvre. He would veer from goofy to deeply troubled; from sadistic to attention seeking. His records played like the tumbling mind of teen tearaway. It’s as sinister a place as you might expect.

Amid the misanthropy, though, came moments of depth. Tyler’s solo output examined young relationships and the weight of being a role model. Answer is the most moving account of absent father issues I’ve heard as the rapper envisions what he might say if he could pick up the phone to call his invisible dad.

Earl Sweatshirt – not present at The Academy after he was smuggled to Samoa by his concerned mother in what was the music industy’s biggest mystery since the question of what Meat Loaf wouldn’t do for love – has evolved from a 16-year-old raw talent with a nimble flow, to a brooding, introspective artist.

Then there’s Frank Ocean, a true 21st-century superstar. His creakingly soulful album Blonde was a stunning depiction of getting older. He was only 28 when it was released, but he is old enough his entire life no longer feels like it’s in front of him.

Now here comes Tyler, the brash rascal no longer. His new album might be called Scum F**k Flower Boy – and is due for release on Friday – but don’t let the title turn you off. (He has been calling it that for months, but his label is keen to point out that it's "official name" is Flower Boy.) The record plays like the most blissful summer nectar. The severity has been stripped out of his methodology. This is music for eating hot barbeque and sipping on cheap beer. Tyler makes rap music that could appease The Beach Boys. It’s as quintessentially Los Angeles County as sitting out in Echo Park, or eating Vietnamese food in San Gabriel Valley.

Chiming xylophones, gently caressed piano chords, lazily strummed electronic guitars and soulful vocals – the record has musicality flowing through every groove. The hazy synths of opener Foreward recalls the buzzing cool of Kool & the Gang’s Summer Madness. Boredom ends with broad, playful orchestration that links Tyler to studio wiz composers like Van Dyke Parks and Jon Brion. Tracks like the bass-heavy, A$AP Rocky-assisted Who Dat Boy? prove he can still serve up a cast iron banger when he feels like it.

Flower Boy also engages with an issue that has dogged Tyler’s career: his homophobia. For all there is to admire about his sturdy discography, the regular use of the word “faggot” has been the thorn among the roses.

Tyler has said he doesn’t use the word as a specific reference to gay people (let’s call this the “Eminem defence”). But the idea that a straight man could be the self-appointed champion to redefine such a loaded expression is extremely suspect. Especially when Tyler used it in the same barbed way card-carrying homophobes have done for years.

But on Flower Boy, Tyler recontextualises his oeuvre by appearing to confirm he is attracted to men. The references are abstract, but there are many. On Foreward he raps: “Shout-out to the girls that I lead on… And trying they hardest to keep my head on straight.” And from I Ain’t Got Time: “Next line I’ll have em’ like ‘woah’/ I’ve been kissing white boys since 2004.”

Rumours about Tyler’s sexuality have been floating around for years. He’s hinted about it in interviews and on social media enough. “I tried to come out the damn closet like four days ago and no one cared hahahhahaha,” the star tweeted in April 2015. It was dismissed as shenanigans from one of rap’s chief mischief-makers.

If the album is largely autobiographical, we may have been witnessing a real-time depiction of one person coming to terms with his own sexuality. A young man who used a mix of ugly humour and lashed-out menace as he worked through his own internal feelings. This is something rarely depicted in art from start to finish so three-dimensionally.

Flower Boy might lack the raw power of some of Tyler’s first batch of tracks, but it reestablishes why we need him out here right now. Amid Odd Future’s extremely sanctified alumni, he can’t be ignored.