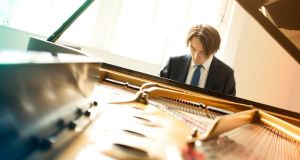 RTÉ Contempo Quartet Chapter House, St Mary’s Cathedral, Kilkenny 4pm €15 orchestras.rte.ie i, and on tour to Limerick, Dublin and Cork The RTÉ Contempo Quartet’s complete cycle of Beethoven’s string quartets reaches its fourth instalment. Two quartets from different periods (in C minor Op. 18 No. 4 and in E flat Op. 74) are separated by Snowline, a new RTÉ commission from Northern Irish composer Deirdre McKay. The composer will be on hand at the premiere to discuss the work with the Contemporary Music Centre’s Linda O’Shea Farren.

Russian pianist Daniil Trifonov, one of the hottest properties in the world of the piano, makes his Irish debut in a Chopin-theme programme at the National Concert Hall. He traces the composer through the works of other men, variations and tributes by Mompou, Schumann, Grieg, Barber (indirectly through Barber’s Nocturne, a Homage to John Field), Tchaikovsky and Rachmaninov, before getting to Chopin himself, when the main work is the Funeral March Sonata. There’s a pre-concert talk at 6.45pm by Orla McDonagh, head of the DIT Conservatory of Music and Drama.

National Opera House, Wexford 7.30pm €25/€20.irishbaroqueorchestra.com and on tour to Dublin and Galway

Peter Whelan is as exciting a live wire as Ireland has produced in the world of period performance. It’s an open secret that he will next year succeed Monica Huggett as artistic director of the Irish Baroque Orchestra. So you can regard his performances on the orchestra’s annual tour of Handel’s Messiah as a taster of things to come. The soloists are Sarah Power, Sharon Carty, Peter Harris and Brian McAlea, and the choral contributions, as ever, are provided by Mark Duley’s Resurgam.