Growing up in Kerry, people ‘acted weird and called it normal’ 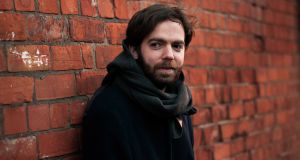 Shane Culloty: “You start reading about Marian statues and everything is awful. You end up looking at the Ann Lovett case and it’s just horrifying”

“I don’t know if there is a shorthand for north Kerry. If there is, I imagine it’s a wet beer mat and a John B Keane quote.”

Shane Culloty is tucked into the quietest corner of a pub we can find in Dublin on a sunny Friday evening. The after-work crowd is two drinks in and boisterous. He’s talking about a mysterious thing: a sense of place that you can pick up from a book, a film or a piece of music. A geographic place, sure, but also a mental space: a sound or an image you almost feel you could live inside. We’re talking about an unpredictable combination of the literal and the metaphysical. We’re talking about a north Kerry of the soul.

Culloty grew up on a farm outside Tralee, a place where, he says, there was little to do but read and listen to music. As a classic angsty teenager, it was small-town pubs and rough nights out. Earlier this year he wove his memories of that time and place in to his debut album as Winter Aid, The Murmur of the Land.

Culloty first released material as Winter Aid in 2013, after years of writing about music on The Torture Garden, one of Ireland’s first music blogs. That first release, The Wisp Sings, was three tracks of intimate, electro-acoustic folk, home-recorded and rough around the edges. The title track has since become something of a sleeper hit on Spotify, clocking up more than eight million plays thanks to its presence on some extremely popular playlists.

This turn of events took Culloty by surprise, but he’s aware that, for most listeners, it’s simply something heard in passing, something in the background. More pleasing, he says, is the number of listeners who came back to it, who chose it for themselves.

“A surprisingly good percentage of people who listen to it once listen to it again,” he says. “That, more than the eight million or whatever it is, that’s a really good stat. That makes me happy. Then there’s obviously a tiny percentage of people who really like it, and that’s such a blessing. Obviously if I had released something before Spotify, that wouldn’t have happened.”

The unexpected reach of the track has led to it turning up in some unpredictable places, including a video made by Nepalese film-maker Aneel Neupane, which led to Neupane directing the video for The Night Is an Ocean, the album’s first single. A quick YouTube search throws up dozens of videos set to the song, from a live digital painting of a Batman villain to an interpretive dance competition.

The Wisp Sings and Within, the EP’s second track, both appear again, much changed, on The Murmur of the Land. The album goes deeper into hazy, conflicted memories of being a bored and imaginative child in rural Ireland during the 1980s and 1990s.

“I wanted to get out of there as soon as I could, see the world, see bands,” he says. “Meet new people, stuff like that. As I was working through these songs, I was starting to realise that there was really beautiful serenity and calmness and solitude out there. Which I know I liked at the time, but I now appreciate much better having lived in places that are the opposite.”

Culloty left Kerry for college in Cork, and then moved to Berlin for a few years. It was in Germany that he began to take his music and his writing more seriously, finding, as many have, that a little distance from the familiar can be a powerful creative catalyst.

“I definitely lost a lot of preconceptions and started doing more creative things, started writing,” he says. “I did start taking it seriously and I don’t know what set that off. It wasn’t like I suddenly realised I was good at it. It was more like what was stopping me might have been at home. There is this whole Irish thing of ‘notions’ and all that.”

That sense of distance also feeds in to the nostalgic feel of The Murmur of the Land. It’s an album heavy on tape delay, VHS-style fuzziness and big, warm synthesisers. It’s not rose-tinted nostalgia, though, and there is a near-constant undercurrent of unease or confusion. The album’s artwork features photographs Culloty took of roadside statues of the Virgin Mary. Coming back to the heavily religious environment of north Kerry after some time away allowed Culloty to see the strangeness of what he describes as “everyone acting weird and calling it normal.”

“You’re driving around Kerry and Cork and suddenly you’re like, that’s the 20th statue I’ve passed,” he says. “If I had never left these areas or if I had been born a decade earlier, I wouldn’t really think about it. Now I go home and I’m saying to my dad, ‘There’s, like, five Marian statues between here and Tralee. It’s like, who made them? Who paid for them? Who keeps them clean?’ Then you start reading about Marian statues and everything is awful. You end up looking at the Ann Lovett case and it’s just horrifying.”

It’s often said the Germans have a word for everything, and Vergangenheitsbewältigung is the one they use to talk about the process of coming to terms with the unspeakable parts of their national history. It’s a phenomenon that Culloty has witnessed up close during his time in Germany and one he sees making a gradual appearance in Irish life.

Culloty is hopeful that artists of all kinds can play a role in that process, seeing everything from ancient folk tales and myths through to contemporary books, films and songs as ways of understanding the confusing, mysterious or tragic events of life.

“Things people didn’t understand, including fundamental things like love, moods and depression, these became folk stories. Someone who just walks out one day and doesn’t come back, that’s the will o’ the wisp. I really like that metaphor of people having these forces in their lives that are very, very impactful and they come up with a story to make sense of it. Which we all still do. Folk tales are like that, religion is like that, and songwriting is like that.”