A glittering rainbow signalled the rain’s end, bathing the field in the colours of tolerance 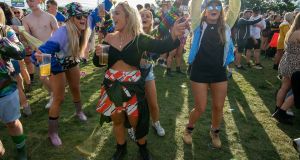 A rainbow glittering behind Olly Alexander as Years and Years brought their main stage set to a close was one of Saturday’s perfect Electric Picnic moments.

Perfect because it framed the band in the colours of tolerance and equality. But also because it heralded an end to the showers that had broken out mid-set, threatening to take the shimmer off Years and Years’ forward-facing, gender-fluid pop.

Electric Picnic was still recovering from Billie Eilish’s show on Friday. She was such a force she literally reduced one teenager – as supersized on the big screen – to tears. Twenty-four hours later, some of us were still recovering from the shock of standing beside bearded bard Glen Hansard for the performance.

Celebs were once again among us on day two. Ali Hewson roamed the Rankin’s Wood stage during Inhaler’s lean and mean turn. She is clearly a fan. As she would be given singer Elijah Hewson – son of Ali and a certain U2 frontman – is a proper chip off the old Bono.

Sadly we didn’t bump into Christy Moore at Freya Ridings (she’s back in Ireland in December, supporting Hozier) or hoist Marty Morrissey on our shoulders during Charli XCX (you would have had only to ask, Marty).

Festival-goers with nagging doubts that they hadn’t quite seen it all were delighted to stumble on the My Lovely Horse Ranch. It featured actual horses – either that or the cosplay was amazing – and a giant inflatable My Little Pony.

Usually the only time you see a blow-up horse at a festival is when you’ve accidentally climbed into the wrong tent and realise you need to get out of there really quickly.

Some punters, meanwhile, couldn’t quite believe they were here (at Electric Picnic, not the sex tent with the blow-up horse). “I got a call on Thursday morning – did I want two Electric Picnic tickets? My friend couldn’t go,” said “Jennifer from Waterford” (sorry again for emerging from behind that tree and peppering you with questions, Jennifer).

She stood in the Body and Soul arena, still pinching herself.

Environmentalism is front and centre of Picnic 2019. With thousands of tents abandoned last year, there’s a push to convey to attendees that caring for the planet is more than a slogan.

One of the reminders of what can be achieved with recycling was a perspex-style box made of repurposed clear plastic bottles close to the Electric Arena second stage.

This was a source of mild mystery and confusion to one couple, who decided they might like to go inside for a closer look. Quite what they were supposed to do once within, they couldn’t fathom.

“Can we come back if it rains?” asked one (who identified himself to an intrusive passerby only as “Carl”). His girlfriend shrugged, and off they mooched.

If shelter was what was required they could have done worse than make their way to the Electric Ireland Throwback stage. There, Bonnie Tyler was the big draw of the weekend.

But on Saturday morning it was a total eclipse of your expectations as retro movie hour unfolded. Matilda, based on Roald Dahl’s heartwarming tale of vicious child neglect, was playing on the screen.

Arranged all around were big comfy mats and deck chairs. You folded yourself into one of the latter, letting Dahl’s deliciously dark view of humanity wash over you, a bubble-bath of Young Adult misanthropy.

And then, almost in real time, memories of your leaky tent, the overnight rain and campers blaring Tiesto outside at six in the morning slipped away.