Firestarter: Keith Flint was the face of UK rave music 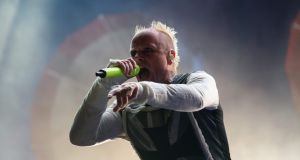 As the lead singer of The Prodigy, Keith Flint carried the sound of British rave music from an insular community of party-goers to an international audience - selling 30 million records worldwide in the process.

The explosive frontman – known for his energetic and deranged performance style, shocking green hair and tattoos – has died aged 49.

Keith Charles Flint was born on September 17th, 1969 in Redbridge, East London. As a child he moved to Braintree, Essex, where he met The Prodigy co-founder Liam Howlett at a nightclub.

They discussed music and realised they shared a taste for harder, club-ready sounds.

Originally a dancer for the group, Flint was promoted to singer after he provided the vocals on the band’s song Firestarter, a track which propelled them to the mainstream.

When the band released the video for the 1996 single, Flint’s performance was deemed too scary for children – meaning many music TV stations wouldn’t play it until after 9pm.

Alongside bandmates Howlett and Maxim, Flint became the face of British rave.

While the group were spoken of as bedfellows with other commercial dance acts like The Chemical Brothers and Fatboy Slim, they pioneered a harsher, more abrasive sound.

They reached number one in the singles charts with tracks Firestarter and Breathe in 1996, and went on to score seven number one albums.

But these songs were not usual dance pop fodder, instead drawing from sonic sounds inspired by the UK’s illegal rave scene.

Known for their overt anti-establishment stance as much for their music, The Prodigy were vocal critics of the UK’s Criminal Justice And Public Order Act 1994, which banned the raves popularised following the so-called second summer of love in 1988 and 1989.

And despite being accepted by the mainstream, they never submitted to the whims of passing musical fashion.

The Essex band has never wholly belonged to any genre. Whether it was the emergent rave scene at the start of the nineties, Britpop later in the decade through to more recent dubstep and EDM – they were lurking, all the time selling millions of records and just as many tickets for their incendiary live shows.

In 2014, Flint bought and renovated The Leather Bottle pub in the Essex village of Pleshey.

He reportedly had a jar that customers had to put a pound into every time they made a “firestarter” joke when he lit the pub’s fire.

The group released their seventh consecutive number one album in November 2018.

All but one of their studio albums hit the top spot in the UK charts, as well as a singles collection released in 2005.

This placed them alongside musical heroes including Sir Elton John, Sir Paul McCartney, Coldplay and George Michael, each with seven number one records. – PA