‘The English like to invade countries, but they get upset if they’re followed home’ 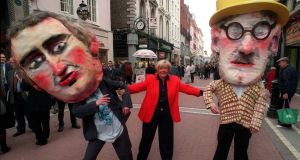 Brendan Behan and James Joyce lookalikes: When a young man asked Joyce, “May I kiss the hand that wrote Ulysses?” the author replied, “No, it did lots of other things too”. Photograph: Eric Luke

When I was asked to compile a book of Irish wit and humour, I was forced to confront the awful question of why humour is such a defining national characteristic, knowing that whatever one Irish person suggests, it will be easy to find another who disagrees. As the comedy singing group The Nualas once said: “There is no disagreement that can’t be solved with a good cup of tea, in the face.” Having said that…

Raining Soup
Insults, (and ancient curses such as “you shit of a crane” and “may your body be a feast for wolves”) have a long heritage. In the Celtic sagas, Ferdia, the warrior of Connacht, taunts Cúchulainn, his Ulster opponent, calling him a “chicken-hearted coward”. And we’re always willing to turn the insults back on ourselves. Brendan Behan, that wasted talent or Irish literature, was willing to write off his countrymen in a single throwaway line: “If it was raining soup, the Irish would go out with forks.”

A Pint of Plain
Flann O’Brien also addressed the readers of the Irish Times column he wrote (as Myles Na Gopaleen) in familiarly insulting terms: “You smug, self-righteous swine, self-opinionated sod-minded suet-brained ham-faced mealy-mouthed streptococcus-ridden gang of natural gobdaws.” O’Brien could be equally cutting in person. When his habit of insulting senior politicians finally provoked his bosses into firing him, a colleague recalled him departing “in a final fanfare of f***s”.

An Island Nation
In the complex and frequently tragic history of Ireland, there have been power struggles and battles at least since the Battle of Clontarf in 1014, and the British have been poking their noses in since the 12th century, with often bloody results (and they’re still at it with the farcical saga of Brexit). On this subject, Tommy Tiernan has commented that “The English like to invade countries, but they get upset if they’re followed home.”

The Hand of Joyce
Irish literature and art have shown a joyous iconoclasm that reflects our tangled history, as suggested by Marian Keyes: “What doesn’t kill us makes us funnier”. In Ulysses by James Joyce the humour is often as black as the sea at Dun Laoghaire on a November night: At Paddy Dignam’s funeral, Bloom finds himself pondering the horror of being buried alive and musing on whether telephones in coffins would be “a good way to prevent this”. Joyce was quick to find humour in real life: When a young man approached him in Zurich and said, “May I kiss the hand that wrote Ulysses?” Joyce’s reply was, “No, it did lots of other things too.”

Wakes and Cakes
Perhaps there is an underlying obsession with death and religion here? One of my relatives, Jessie Heneghan, was something of a hypochondriac. This was when you could only have the last rites before death, so there was a great fear that if you died suddenly you might not get into heaven. Every time Jessie had a cold she would decide she was dying, retire to bed and demand a priest, who would come and dutifully go through the motions yet again. I remember the day after one of these dramatic interludes my nan telling my grandad that she had seen Jessie. “How’s she holding up?” he asked. “She can’t be too bad, I guess, I ran into her in the cake shop.”

Father Blackjack and Father Whitewash
My wife’s grandfather used to grumble about the parish priests who would wander the streets looking for their prey (older members of the flock who might give them a cup of tea and succumb to their piety.) “Here they come,” he’d say, “Father Blackjack and Father Whitewash.” Blackjack was the drinker, the smoker and the straight talker, while Whitewash spent many a mass boring the congregation to tears with his platitudes and waffle. There aren’t many situations that a priest can’t make weirder: At one funeral I went to, the weird spectacle of the priest chucking holy water at the coffin set off a major commotion in the back row as a second cousin commented “you’d think the coffin was on fire the way he’s chucking that water at it”.

Catholicism Explained
The various types of priests have, of course, been captured brilliantly in the national treasure that is Father Ted. At one point, Ted explains the church succinctly: “that’s the great thing about Catholicism, it’s so vague and no-one really knows what it’s about”. Of course it’s now hard to think of the church without remembering the many scandals and outrages that have marred its recent history: there’s not a great deal of humour to be found there, although Sean Hughes had a go with “The Catholic Church has a new policy on child abusers: three strikes and you’re a cardinal”.

Dancing Leprechauns
Conan O’Brien’s talkshow in America once had an absurdly Oirish Patrick’s Day item, replete with dancing leprechauns, which ended with a supposedly Irish audience member lecturing Conan on the difference between fake and real Irish, with one example of the latter being “getting into a bar fight with a girl and, when she beats you, asking her to marry you”.

Like My Da
It’s not often that I turn to the girl group B*witched for inspiration, but I do like the fact that their hit C’est La Vie includes the lovely line “I fight like my da as well”. In general it’s best not to cross an Irish woman. Rosie Hackett, who was prominent in the Easter Rising, barricaded Liberty Hall in 1917 and afterwards scathingly pointed out that it took “four hundred policemen to take four women”.

Beyond the Paddywhackery
Irish humour has always consisted of much more than the creaking clichés of craic and banter suggest. And happily the current generation of comedians and writers is increasingly confident presenting Ireland in its true modern form. Comedians and writers as varied as Dylan Moran, Sharon Horgan, Tommy Tiernan, Alison Spittle, Graham Linehan, Maeve Higgins, Chris O’Dowd, Aisling Bea and Ed Byrne have their own distinctive ways of celebrating and mocking their origins while still occasionally acknowledging the rain-soaked, Guinness-sodden Oirish paddywhackery of old. Amen to that.