U2’s new song Ahimsa: the verdict on the first new music since 2017

Review: Ahimsa suggests U2 are slotting in as the missing link between the Rolling Stones and Coldplay 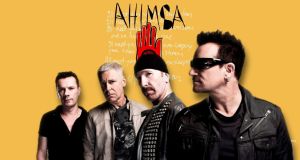 It’s a beautiful day for fans of soul-baring stadium rock. First Coldplay unleash the experimental double album you were always slightly terrified was in them (by way of follow-up they are threatening to solve climate change especially so that they can tour). No sooner have we made peace with the fact that there are now 16 new Chris Martin songs out in the world, there comes another treat. A surprise U2 single, recorded with Oscar-winning Indian composer AR Rahman.

Ahimsa – “non-violence” in the historical Indian language of Sanskrit – precedes U2’s first ever shows in the sub-continent next month. It is very recognisably “late period U2”: the version of the band with which you will be familiar from their last two albums, Songs of Innocence (the one Apple sneaked on to your iTunes as you slept) and Songs of Experience.

That isn’t a terrible thing. It arguably represents an advancement on their Beautiful Day/ City of Blinding Lights incarnation. That was the “back to basics” phase when U2 became obsessed with pastiching their early 1980s selves (minus the mullets but with bonus woolly hats for the Edge). Well, they have at last got it out of their system and are no longer determined to sound like a U2 tribute act.

Ahimsa, the bands first new music sine 2017, suggests they are instead at peace slotting in as the missing link between the Rolling Stones and Coldplay. The former exist nowadays only as an ever-lumbering greatest hits jukebox, the latter are dealers with sparkly platitudes (and without sparkly platitudes, what would arena rock even be?). Here come U2, who are bringing their $300 million grossing Joshua Tree album tour to India in December, pinching a little from column a and a little from column b. It’s a good fit.

Rahman is best known in the West for composing the score to Danny Boyle’s Slumdog Millionaire. He’s very much the junior partner on this new single. Ahimsa begins with a guitar line from the Edge before a Sanskrit choir swoops in. Bono follows crooning: “I’ll meet you where the sky is torn/ I’ll meet you in the end/ I’ll meet you before the world was born/ When we had not a care.”

This is obviously cookie-cutter U2. Super-sized emotiveness delivered with a poetic tilt of the chin. But it works, as does the groove that surreptitiously slips beneath his vocals. Because while Ahimsa is sweeping and grandiose, there’s no bombast. It isn’t the least bit histrionic. U2 feel more carefree than at any point in the past decade.

Bono buffs seem a bit leery towards the single (judging at least from early responses on fan forums). Some might argue they’re being harsh: the chorus is a Coldplay-esque typhoon of empathy and ennui and Bono appears to have moved beyond sounding like somebody’s dad doing a Bono impersonation.

U2’s new release doesn’t reinvent anything, it is true. But it is meticulously strident and doesn’t lack for catchy moments. You probably didn’t wake this morning thinking you needed a Sanskrit-inflected U2 single co-recorded with the guy from the Slumdog Millionaire soundtrack in your life. Yet Ahimsa pleads its case persuasively and what might have been an ill-judged experiment more that justifies its right to intrude on your eardrums.