Snow Patrol at Malahide Castle: Everything you need to know

Set list, tickets, weather, restricted items and transport for the first gig of a summer series 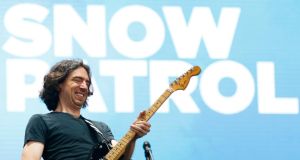 Who is playing and when?

This year’s summer concerts in Malahide Castle, in north Co Dublin, kick off on Friday with Snow Patrol’s gig. It’s always interesting to see what happens to a music act after a significant time away. Are the fans still with them? Are the songs just as good? This time last year the band released Wildness, their first album since Fallen Empires, from 2011, and although it had its moments, in songs that referenced Gary Lightbody’s personal struggles, it’s unlikely anyone but an ardent fan could hum along to any of its tracks from start to finish.

In other words, the songs haven’t popped into the head anywhere near as easily as those on earlier albums, such as Final Straw, Eyes Open and 100 Million Suns. There are enough ever-ready tunes on those early records to keep the open-air crowds satisfied, however, as a massed singalong to Chasing Cars will, no doubt, prove.

Gates open at 5pm. Bear in mind that Hogan’s Gate, near Malahide Dart station, will be the only pedestrian access to the grounds. And plan and book your return travel beforehand. It’s a long walk back to the city.

The concert entrance is about a 10-minute walk from Malahide Dart station – the organisers recommend public transport, given the likely congestion and parking problems (clampers and tow trucks will be operating) for anybody who drives to the concert.

Dart, train and bus: The last Darts leave for Dublin at 11.10pm and 11.40pm. Trains leave for Dundalk at 11.04pm and 12.05am. Concert buses will leave Malahide Cricket Club (follow the signs from the concert grounds) for George’s Quay, in central Dublin, after the gig, at 11pm. You can book tickets (€10) here or take your chances and see if any are left on the night.

By car: If you do bring your car, the limited parking opens an hour before the gates.

Going by Snow Patrol’s set list in Bangor a fortnight ago, you’re likely to hear:

Ticketmaster is still selling tickets, including some resale tickets being offered at a discount by fans looking to sell their extras. Buy tickets from accredited sources only.

What’s the story with security?

Under-16s must be accompanied by an adult; bring your passport, Garda age card or driving licence as evidence of your date of birth. Allow time for security checks on the way in. Bags larger than A4 size will not be permitted. All bags may be searched, and this can be time-consuming, so consider going bagless for easier entry. There will be no cloakroom or storage facilities. No umbrellas, alcohol, garden furniture, selfie sticks, flares, glasses or cans, among other items, will be permitted at the event.

Yes, but only with a smartphone or small camera. GoPros, professional cameras and any other recording equipment are banned.

The forecast is for rain, although with luck there’ll be some sunshine in the afternoon as well. And it will still be pretty cool, with temperatures of 10-12 degrees. So wear wet-weather (or, at least, outdoor) footwear, but bring suncream and a hat, too.

André Leon Talley: How Anna Wintour threw her right-hand man ‘under the bus’
7