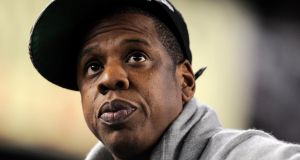 Jay-Z has been named the world’s first billionaire rapper in a new Forbes cover story.

The magazine claims the 49-year-old’s empire “conservatively” totals $1 billion, or about €890 million, after valuing his various ventures as well as any real estate and his art collection. Jay-Z, whose real name is Shawn Carter, is one of just a handful of billionaire entertainers and the first hip-hop artist to claim such a fortune.

“It’s bigger than hip hop,” his long-time collaborator Kasseem “Swizz Beatz” Dean says. “It’s the blueprint for our culture. A guy that looks like us, sounds like us, loves us, made it to something that we always felt that was above us.”

His most valuable holdings include his $310 million (€275 million) ownership of Armand de Brignac champagne, a $100 million (€89 million) stake in D’Ussé cognac, his $100 million Tidal streaming service, $50 million in real estate and a $70 million (€62 million) investment in Uber. It’s also estimated that his music catalogue is worth about $75 million thanks to a careful negotiation of his publishing rights.

“Most times rappers end up broke or nowhere,” he said in 2005, when his estimated worth was $350 million (€311 million). “It’s time for someone to take it to the next level, to become an executive and open the doors for the culture.”

Jay-Z grew up in a housing project in the Bedford–Stuyvesant area of Brooklyn, and was selling drugs as a teen before he started rapping. Without a label, he started selling CDs out of his car before releasing his first album, 1996’s Reasonable Doubt, which has sold more than 1.5 million copies since. In 2008 he married Beyoncé, whose net worth is estimated to be $355 million. On his last album, 2017’s 4:44, he rapped: “Ain’t no such thing as an ugly billionaire, I’m cute.”

Recently, the rapper has been involved in philanthropic endeavours, offering legal assistance to cases involving black men mistreated by the criminal-justice system.

“If he’s a billionaire now, imagine what he’s about to be,” Swizz Beatz also says. “Because he’s only just starting.” – Guardian