When it comes to performing Steve Reich, the percussionist says, preparation is key 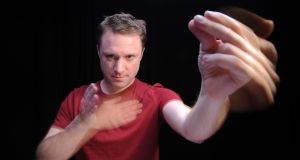 Colin Currie: ‘You’re either on the note or you’re off.’

“Depending on how you cut it,” Colin Currie says wittily, “percussion is one of the newest old instruments or the oldest new instrument in classical music”.   The distinction is necessary, he adds, “because, obviously, in all the vast cultures in non-Western societies, you’ve had percussion dominant for many centuries. For example, gamelan in Indonesia, the whole tradition of music in the sub-continent of India, in Africa, in South America. You could even contend that so-called Western society is one of the last societies to emancipate percussion with its own identity.”

Sure, Mozart wrote imitations of percussion-heavy Janissary music (in the overture to his opera The Abduction from the Seraglio and in the Rondo alla Turca) and drums and cymbals have long been integrated into classical orchestras. But percussion as an independent focus or as a standalone event is a late arrival.

Currie points to Stravinsky’s great early ballets, Petrushka, The Firebird and, especially, The Rite of Spring, although he does give a special acknowledgement to the contribution made in the 19th century by a composer like Berlioz.

From the post Rite of Spring world he names Edgard Varèse (whose 1931 Ionisation is the first major work for percussion ensemble), Béla Bartók (whose Sonata for Two Pianos and Percussion is “one of the greatest works of the 20th century, and still a very challenging piece, not easy to play”), Olivier Messiaen, Pierre Boulez (who wrote “great pieces” and whose influence is “very strong. A lot of people started writing for mallet instruments in a way that Boulez kicked off”) and Karlheinz Stockhausen (whose 1960 Kontakte for percussion, piano and electronics, is “an amazing, very virtuosic piece for percussion, one of those pieces you could call ‘original and best’”). His list gets fuller for more recent decades.

Currie is known for his special relationship with Steve Reich, and the home page of his website has a rolling video of him playing Clapping Music with the composer. The connection, he says, is “born of my sheer love of his music. An infatuation from my teenage years. I got to know all the big blockbusters first of all. Music for 18 Musicians must have been the first piece of his that I heard, Clapping Music could be the first that I ever played. I gradually came to see that he had this huge body of works. And I realised also that he was still composing.

“The first world premiere of his that I attended was Proverb at the BBC Proms in the mid-1990s. I gradually pieced together my own appraisal of him, that, yes, he was the composer who had written Music for 18 Musicians in the 1970s, but he had also been working steadily and grafting hard towards a piece like that, which just came out of mid air.”

Proverb was prompted by and is dedicated to Paul Hillier, artistic director and principal conductor of Chamber Choir Ireland. It’s a setting of a short text by Wittgenstein (“How small a thought it takes to fill a whole life!”) in a manner that relates to the 12th century, in acknowledgement of Hillier’s connection with the world of early music.

“To this day,” Currie continues, “as we sit here now, he’s still writing, still finding the new in his music. He has this amazing sweep over several decades now. It’s astonishing. As a percussionist, of course you’re drawn to him, he writes so well for the instruments. And most of his major pieces have a percussion ensemble front and centre of the group.”

Music for 18 Musicians, he says, “works a bit like a gamelan orchestra, with the vibraphone ringing the changes as the metallophone would in the music of the gamelan. Very appealing. But I would never have known that it would lead to the relationship I have had with him – the creation of my ensemble, and also getting to work with him.” Currie set up his ensemble expressly to play Reich’s music, and has since split off a quartet, which Reich has also written for.

So what are the challenges in performing the great man’s music? “I do talk about the tightrope of his music, and also the duality of it – the need for two things which at first seem mutually exclusive, but with him they’re linked, unbreakable.

“There is the accuracy required, a phenomenal degree of accuracy. Any kind of fudging or missed notes, or failure of stamina would be treacherously bad news in a piece of his.

“But at the same time none of that must ever take away from the groove of the music, however you’re playing that. Sometimes you want the groove to be rather flat and square, and that’s very valid, we often aim for that, it’s true. Other times you want it to be a bit more lifted, a bit more dance-y, a bit more light on the feet... or a bit more in your face. But it’s all going to have that groove. And the groove can’t exist without the accuracy and vice-versa. You’re always working with those two elements together. It’s gotta have all those elements united and functional.”

This all suggests that some of the freedoms that a violinist or a singer or a pianist might have are excluded. “You’re either on the note or you’re off. There’s no good to be found in just playing the shape of the music. You have to be absolutely all over it. This is why it’s difficult. The mistake that people often make is that because the ideas and the process in the music are often beautifully simple, they don’t realise how challenging they are to bring off.

He points to one of the obvious but not frequently commented aspects of being a percussionist. “It’s so complex getting the notes out of an instrument like a marimba. There’s no sense of touch involved. The accuracy is very, very difficult for that reason. You’re at one remove from the instrument. You can play a whole percussion recital and never directly touch a single instrument, ever. It’s all at the remove of a stick.

“The accuracy is very, very difficult, and the practice required to make it work is painstaking. It’s very tough. Your work is never done, really. I would hesitate to take my brain off the gas, mentally. You really have to remain super-duper on the ball. And a heightened sense of quickness, of reaction is essential.”

Anyone who’s ever studied an instrument will remember having to learn scales and arpeggios. They are elements from which the musical equivalent of words and sentences are created. And with so many notes to master – more than 60,000 in many piano recitals – musicians think about things in larger patterns rather than smaller ones.

This seems to be true for Currie, too. “It’s like walking down the stairs. You can saunter down the stairs at a quick pace no problem at all. Begin to look at your feet, at what’s going on, that’s when you trip up. It’s exactly the same in music. I’m always telling students, don’t look down. Keep looking at point north, keep going.”

He doesn’t put this down to what’s often called muscle memory. “I know why that phrase has been coined. But it’s the brain and the quickness of the reaction which is what’s meant by the term. I’m not going to unpick that one. But that’s why practice is done to death as a percussionist. A lot of your preparation is very mechanical, just to get these moves, these very complex, very subtle and very focused moves really drilled.” Practice, he says, “is a blue-collar shift. It’s drilling the tricky passages.”

I mention a new music specialist who told me she’s not happy to go on stage until she can actually play her part backwards as well as forwards. Currie counters with someone he knows “who practices playing the Ligeti Piano Concerto while reading the newspaper. It’s to make sure that the brain is able to deal with other things that are going on whilst the mechanics of the hands keep going.”

He says he understands that though he’s never attempted it. “But I can relate to all these things. There’s a lot of inner game theories, and lots of things that work for different people. People have all kinds of regimes in place for this. I’m more of a broad brush. I just always try and come prepared, very prepared. Leave the head backstage and take the heart with you. It sounds very clichéd. But the head seldom helps. That’s always just getting in the way onstage. Leave that behind and just let it happen.”