Vijay Iyer performs in Belfast, while the Richie Buckley Quintet is in Dublin 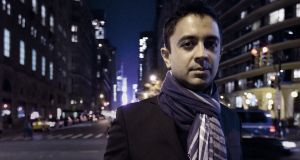 ReDiviDeR
The Workman’s Club, Wellington Quay, Dublin 2, theworkmansclub.com
Drummer Matthew Jacobson is one of the most dynamic forces in Irish jazz, an inventive percussionist with a liberal artistic nature that has seen him traverse the uplands of contemporary creative music, from the avant folk of Clang Sayne to the funky freedom of Insufficient Funs and the dense rhythmic complexity of Umbra. But the primary focus for his own compositional explorations is ReDiviDeR, the palindromic “no chords” quartet he formed in 2007 with sure-fingered bassist Derek Whyte and two of Ireland’s most intrepid horn players, trombonist Colm O’Hara and saxophonist Nick Roth. The band already have two excellent releases on the Diatribe label under their belts, and ahead of a new studio recording, they play the ongoing Dublin Jazz Co-Op series in the Workman’s intimate Vintage Room, overlooking the Liffey.

Date and Dunlea
Coughlans, Douglas Street, Cork, facebook.com/events/coughlans-live
Trombonist Paul Dunlea and Australian-born guitarist Ian Date, two of Cork’s leading jazz musicians, have begun collaborating in duo over the last year, discovering an easy rapport that blends an accessible standards repertoire with high levels of creativity and interaction . The duo setting is challenging, particularly for a trombonist, but Dunlea, who toured internationally with Michael Bublé’s orchestra in 2019, more than rises to the challenge.

Vijay Iyer
Sonic Lab, Belfast, movingonmusic.com (also Tuesday, January 14th, lecture)
Moving On Music, Northern Ireland’s leading promoters of creative music, kick off the new decade with style, in the shape of a solo performance from one of the most forward-thinking musicians in jazz, acclaimed New York-born pianist Vijay Iyer. Composer, bandleader, producer and music theorist, the 48-year-old is widely hailed as one of the most influential US jazz musicians of his generation, winning Artist of the Year in Downbeat magazine no less than four times in the last decade, and releasing a string of critically acclaimed albums on the ECM label. A trained mathematician and professor of music at Harvard University with a doctorate in the cognitive science of music, Iyer is one of the more coherent intellectuals of US jazz, and as well as an unmissable solo performance on Monday 13th in the Sonic Lab, the pianist will also give a lecture about his music on Tuesday in the same venue. Both events are a must for anyone interested in the direction creative music is taking in the new decade.

Linley Hamilton Quintet
Lost Lane, Adam’s Court, Dublin 2, lostlane.ie
Dublin promoter Dominic Reilly is presenting a monthly series of Sunday afternoon concerts at the new Lost Lane venue – on the site of the former Lillie’s Bordello off Grafton Street – and the series kicks off this week with a quintet led by leading Belfast trumpeter, educator and BBC broadcaster Linley Hamilton. The trumpeter toured Ireland in 2019 with an all-star band that included US drummer Adam Nussbaum, and a new album by the group, For The Record, is slated for release in the Spring. Nussbaum may not be on the bill this time, but he is more than ably replaced by star Belfast drummer Darren Beckett. The classy group also includes saxophonist Derek O’Connor, pianist Cian Boylan and bassist Andrew Csibi, and there is a guest appearance from Lisburn-based US vocalist Dana Masters.

Richie Buckley Quintet
Arthur’s, Thomas Street, Dublin 8, arthurspub.ie
At this stage, saxophonist Richie Buckley can lay some claim to national-treasure status in Irish jazz and his relatively infrequent appearances as a leader always draw an appreciative crowd. An intuitive, virtuosic player with a deep understanding of the classic saxophone tradition, Buckley has worked with everyone from Freddie Hubbard and Elmer Bernstein to Barry Manilow and Bob Dylan, and he was a long-standing member of Van Morrison’s touring band. The Dubliner’s current quintet is a powerfully swinging group with pianist Myles Drennan, guitarist John Moriarty and the senior rhythm team of bassist Dave Redmond and drummer Kevin Brady.

‘In five seconds my life changed. I was worse than the worst jazz snob’
5