Billie Eilish: ‘Every moment this year has made me feel, What the f**k is going on?’

The most exciting pop artist of her age on fame, fandom and her fears of adulthood 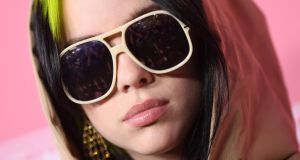 Billie Eilish was a star long before 2019. For a lot of 13- and 14-year-olds she was a game-changer the moment her song Ocean Eyes appeared on Soundcloud in 2015 – an artist who spoke directly to her audience because she was her audience, a teenage girl who had cowritten the song as a piece of homework and uploaded it for her teacher to access.

But 2019 was the year that Eilish’s impact on pop became unavoidable: a show-stealing performance at Coachella; the youngest person to be nominated for all four biggest Grammy categories; the loud praise of fellow musicians from Tyler, the Creator to Thom Yorke; and a raft of younger artists operating under her influence.

Her debut album showed that, in a world of pop stars desperate to be seen as auteurs, Billie Eilish genuinely is one – a fact underlined by her directing the impressively disturbing video for her single Xanny

Most importantly, the release of her debut album, When We All Fall Asleep, Where Do We Go?, confirmed her as the most exciting pop artist of her age: a dark, adventurous, eclectic set of songs that appeared blithely unconcerned with chasing trends. Recorded at home by Eilish and her elder brother, Finneas, without cowriters or big-name producers, it showed that, in a world of pop stars desperate to be seen as auteurs, Eilish genuinely is one – a fact underlined by her directing the impressively disturbing video for single Xanny. She turned 18 last week.

This looks like the year when your career went crazy. Does it feel that way?

It was pretty steep, but it still felt gradual to me, even if it didn’t seem that way to the public. Everyone suddenly thinks I’m famous, but, you know, I was 13 when Ocean Eyes came out. Then again, that’s a lot faster than some people. They spend 20 years and for me it happened in three. But every moment this year has made me feel – “What the f**k is going on?” – in good ways and bad.

You’ve been very open about struggling with depression at the start of the year. Was there a moment where you thought you might give up making music, or was that what kept you going?

I don’t know. People talk about how making music is healing; I think listening to music is healing, but I don’t think making music is. It doesn’t heal to make music for me, but there are so many other things that do. The main thing is thinking about what I do for a living, having that be the thing that makes me remember what I have.

The fandom you inspire is intense. Is it difficult to deal with?

It’s crazy. Fandoms are a really insane thing. It’s strange growing up as a fan, wishing my favourite artist would do this or that, and now being on the other side. Now I understand why my favourite artist couldn’t do this, or couldn’t be this way when I wanted them to be. And it’s a big responsibility, but the fans are the reason that you’re anywhere, pretty much, and they actually have my back most of the time. So, yeah, I love them. It’s a lot of responsibility, but I just live with it, you know?

You clearly don’t have a standard teenage life. How do you find space to live a “normal” one?

A normal life – I never wanted that. It’s not like this life is what I was dreaming of growing up, but all the things that were considered normal growing up I never liked doing… I can’t explain it without sounding so annoying! I’m pretty okay with the way things are. I wouldn’t want anything else. Even when parts of what I have now aren’t what I want, I don’t really care – it all goes into having this other thing that I literally couldn’t have dreamed of having.

You directed the video for Xanny – do you want to do more of that?

I think that’s a big problem in the world with women. I don’t think people like us being the boss, especially because I was 13, 14, 15 years old: they really didn’t want a 14-year-old girl to direct a music video. But I knew I wanted to and I convinced them, I got their trust, and from here on out I want to do my own videos, and I eventually want to make a movie.

I’ve wanted to direct my whole life. I love cinematography, the camera angles, the visuals. I think We Need to Talk About Kevin is shot so beautifully – a movie like that is my goal in life, even though it’s about the most f**ked-up shit ever. Whatever my movie’s about, I want it to make someone feel the way I felt when I watched that.

It’s funny, he actually called me right after that article came out: “Billie, I did not say you are making experimental music, I literally just said we’d been experimenting on new stuff.” We’re just, like, seeing what we can and can’t do; we’re making the same Billie Eilish shit, it’s just growing.

He’s been working with other artists – Selena Gomez, Camila Cabello. Do you see a point where you could work with someone else, or is your relationship too close?

I don’t enjoy working with other people. Finneas is really good at writing music, really fast, so he can sit down with anyone and write something. For me, it’s never been a comfortable thing, so it can’t be someone random I work with. I’m not opposed to it, I just don’t see the need right now. You know, he’s not working with other people because he hates me.

You’re inundated with offers to collaborate – everyone from Alicia Keys to BTS. Who would you most like to work with?

Collaborating doesn’t really interest me. It’s a question I get asked all the time, and I genuinely don’t want to. It’s nothing against anyone, I just don’t feel the need. I love music, I love other artists, but I hate that as soon as I meet an artist the entire world is, like, “Billie Eilish and so-and-so might be doing a song together!” Why can’t I just be a friend with them? I’m not saying it’s never going to happen, but it’s not something I’m looking for.

Plans to celebrate your birthday?

I’ve wanted to be 18 my entire life, and a couple of months ago I realised how much I like being 17. And I’m worried at the same time that people who like me, like me because I was young. And now I’m not going to be, they’ll all be like “meh”. So I don’t know. I’m confused. It’s like when somebody turns 18, the whole world’s against them. – Guardian

A blow-by-blow guide to the Easter Rising
9

Inside the dark web: ‘The truth is there is a lot of evil out there’
10