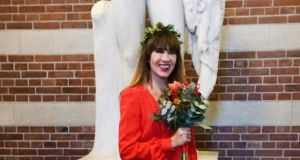 Mary Victoria Clarke on her wedding day in Denmark as she gets ready to wed Shane MacGowan.

The pair, who have been together for 32 years and engaged for 11 years, were married in a civil ceremony in Copenhagen on Tuesday.

Among the guests were the actor Johnny Depp who is a long-time friend of MacGowan. He played guitar after the ceremony in Copenhagen Town Hall.

The London-based publican Gerry O’Boyle, who helped organise the tribute concert to the former Pogues singer in the National Concert Hall earlier this year, also attended.

Ms Clarke posted a photograph of herself wearing an orange dress on her Twitter page and captioned it: “Thank you for the wonderful dress ?@bellafreud? ?@BellaFreudLDN? !!!”

MacGowan, who was 60 in January and has been using a wheelchair since a fall some years ago, wore a trilby hat and a dark navy suit.

In the Sunday Independent Ms Clarke announced the couple were getting married.

“Marriage is a scary business, a big commitment. You might know that you have met ‘The One’, the minute you lay eyes on them across a crowded bar. You might have been mesmerised, enchanted, and entirely convinced that you couldn’t live without them. But you have to be certain.”

She described the two of them as a “pair of introverts” and neither were interested in a traditional wedding.

“We decided that the only solution was to just elope together to someplace that we know nobody and nobody knows us, and keep it a secret. Which is what we have done.