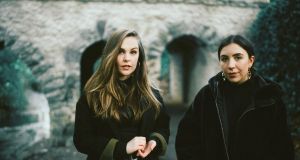 Saint Sister duo Gemma Doherty and Morgan MacIntyre: their debut album Shape of Silence is a subtle but observant insight into broken Ireland 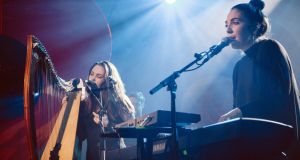 “I view our songs as very personal songs that are just lived experiences and, I guess, the personal is political and that’s maybe why that’s coming across,” says one half of the Saint Sister duo Morgan MacIntyre. “Yeah,” adds Gemma Doherty, “it’s more instinctive reactions to things as opposed to setting out with ‘we’re gonna make this’ or ‘we’re gonna try this’. It’s similar. Those things are just in you and they come out.”

Shape of Silence, their debut album, is a subtle but observant insight into broken Ireland. Although not outwardly political, through their own personal experiences of new and burnt out relationships, fragments of emigration, unemployment and the feeling of being left behind weave through songs like Tír Eile, Twin Peaks and The Mater.

With the vein of activism taking a firmer hold on the young people of Ireland, their music indirectly captures what it’s like to live through these times. “I think that’s something that we really want our music to have; honesty,” says MacIntyre, explaining that they never implicitly tried be political with their music. “The last thing we want, whether it’s playing live or if you’re listening to the record, is for people to kind of feel that it’s contrived. Honesty is what we strive to do.”

Meeting the week of the Take Back the City protest and evictions on North Frederick Street and one week before the Eighth Amendment was officially removed from the Irish Constitution by President Michael D Higgins, both MacIntyre and Doherty comment on the increasing number of people stepping up as activists.

“You know sometimes you feel powerless, especially as a musician which can be sometimes – well, most of the time – it’s a very indulgent craft you don’t really feel like you’re adding a lot to the world that’s very substantial and useful, except for, like a few songs,” explains MacIntyre. “But with things like that, it’s like ‘what can we do?’.”

Along with other Irish musicians like Hozier, Loah, Wyvern Lingo, Kojaque and Mango X Mathman, it’s not unusual to see Doherty and MacIntyre take to the streets and protest peacefully, be it for women’s rights or against the current housing crisis. “People are just adding their voices,” says Doherty. “It’s just such a powerful time at the minute.”

In the three years since the release of their Madrid EP, Saint Sister have matured into their sound, placing a firmer stamp on who they are in their arrangements and lyrics. Early on in their career, the genre of “atmosfolk” found a way to attach itself to them in various reviews and interviews. Does that name still work? “Ah! Atmosfolk,” laughs MacIntyre. “Alex [Ryan], who produced our stuff, he said it one time and we were all like ‘that’s cool!’ He said it one time and it kept coming back,” adds Doherty.

As their instrument load expands to include synths, vocoders and a Wurlitzer piano, on top of Doherty’s harp, their sound has become more contemporary and they’re not sure if that’s a genre that they fit into anymore. “At the time, it did kind of fit but I think we have kind of moved on,” says MacIntyre. “We’ve developed or grown into our style. I don’t know if you’d call... You Never Call isn’t really atmosfolk or Twin Peaks.” Doherty jokingly interjects: “You say atmosfolk like it’s a definite thing.”

Now that they’re hitting that milestone of releasing their debut album, after extensive touring and building up strong and collaborative relationships with artists like Lisa Hannigan, Kormac, Jafaris and film-maker Bob Gallagher, Shape of Silence is an expansive look into how far they’ve come as artists. Precise and eloquent, their songwriting is rich and their composition is precise but experimental.

While earlier songs like Madrid or Corpses might lend themselves to that old atmosfolk tag, they sound like they are from a different time – thanks to Doherty’s harp playing and their melting harmonies – but their songwriting now lies less in the ethereal and belongs very much in the now, capturing the confusion and the confidence of being in your 20s. Having met in Trinity College as students, Doherty and MacIntyre are both from Northern Ireland, and it seems like their exploration of early adulthood as Dublin residents found its foundations in impassioned conversations at house parties.

“The first track, The Beginning, it’s supposed to be that drunk, dreamy hazy of ‘Oh, I see you there. Who are you? I think we can be friends’ and chatting all night to one person and you’re like ‘I think this is going to be a thing’,” says MacIntyre. “That’s the best moment at the very start of the relationship, where you don’t know anything about a person but you’re all on board with them.”

Here is where their sharp observational lyrics come into play. On The Beginning, a small gesture from their love interest to their friends signifies that there’s a spark of romance igniting at one of those infamous house parties. With all of their friends living in Berlin, this romance has the space to allow the days of the week to merge into one on Twin Peaks, as they fall headfirst into each other’s lives. From there on, the cracks begin to show and the masks begin to slip.

“The narrator in our songs is figuring out herself or himself instead of just in relation to another person. I think that’s reality, that’s something we’re all familiar with,” says MacIntyre. “We work all the time together – the two of us – and we’re really interested in when people define themselves in relation to another person and what that means for yourself; whether you can truly be yourself if all you’re trying to do is figure out someone else.”

As the second half of the album deals with the fallout from love, the voice and words of author Kevin Breathnach – an old college friend of MacIntyre – add an extra level of unease to the self-conscious handwringing found in Steady, a song that’s set during the bargaining stages of a dying romance. Taken from his forthcoming novel Tunnel Vision, Doherty thinks that his words enhance the loneliness that that song illustrates. “It brought the song to a whole new level as well. He’s on the Shape of Silence, which is an instrumental track, and it’s a very, very short track where the title came from so it was nice to tie them all together,” she says.

In terms of a relationship running its course, the chorus of The Mater – the album’s closing song – is simple but devastatingly accurate. “I just wish we laugh in time . . . that’s all,” they sing as the narrator gives up and, like a pinprick to a balloon, the perfect illusion is burst.

“I think the lies that you tell yourself become more self-evident and they become less upbeat and it’s more self-destructive and more self-isolating,” says MacIntyre, discussing the turn that the second half of the album takes. “I think The Mater, it’s my favourite song on the album, and it’s almost articulating what the narrator has been trying to say the whole time and they’ve found the words for the truth of it all and it’s the last act of self-isolation.”

The album finishes where it started: at a house party, but what was fun and exciting before, feels broken, capturing the calm – or the apathy – before the sea of change crashes in. “You’re just looking at all of your friends in a circle and someone is playing a song and you’re like ‘this is my life, I guess’,” says MacIntyre.

Hands off the Toy Show: Why the Grinch can’t steal our Late Late Christmas
6

WB Yeats, the Spanish flu and an experiment in quarantine
10