New artist of the week: Noname 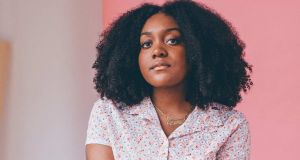 Noname, the poet-turned rapper made her reputation with 2016’s mixtape Telefone, a release of thought-provoking hip-hop

Who: Noname
What: Poet/rapper following in Chance The Rapper’s trail
Where: Chicago
Why: In the last five years, Chicago has become a hotbed of socially-conscious rap music. Leading the charge is Chance The Rapper, whose gospel-infused jazz rap is as poppy as is it is uplifting and positive, kicking against the negative reputation of a city that’s been called Chi-Rap and Murder City. Chance has always pulled those below him up, with artists like Saba, Joey Purp, Jamilia Woods and Vic Mensa getting features on his big releases.

Fatimah Warner is another name who has benefitted from Chance’s glow and is set to make her own as Noname. The poet-turned rapper made her reputation with 2016’s mixtape Telefone, a release of thought-provoking hip-hop.

The lead single Diddy Bop was performed by Noname on NPR’s illustrious Tiny Desk Concert series in 2017 and the video is a perfect intro to Noname’s brand of soft glow rap positive. Much like her mentor, Noname raps about good times in an infectious way and her cadence has an elevated schoolyard sound.

On Noname’s first official album Room 25, released this month (after a move to California), Noname’s raps have a relaxed and delicate feel, low in the mix that gives her music an intimacy like a bleary early morning sunlit walk or as she suggests on the opening track - “Maybe this is the album you listen to in your car when you driving home late at night.” Paired with live band jazzy soul and instrumentation that heighten the album’s solemn introversion, it’s best processed whole, a portrait of soul-searching affirmation.

Anna Mieke Bishop is an Irish folk artist who has quietly been developing her craft. Nowhere is this more evident than her recent song Keep It Whole. “Keep it whole/Keep it sacred/Keep it pure among the wasted,” the Cork-based artist sings with lilting fingerplucked guitar and a command of the genre that suggests the dawning of a new talent indeed.

Virginian singer-songwriter Natalie Prass’s latest album The Future And The Past found her switching up her ornate folk sound with disco grooves and funk expression. The Fire, her latest single from it has the orchestral stabs, strings and guitar riffs to back that up while sounding like a Bee Gees original. Prass plays The Workman’s Club in Dublin on November 6th.