A great band perform some awful new songs at 3Arena. At least they’re not playing it safe 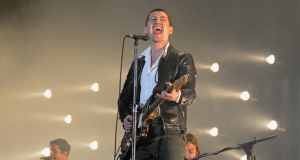 3Arena, Dublin
Arctic Monkeys have spent a career forging the outer reaches of their sound, wrangling from their instruments the kind of power that could shake the grandest arena and lift stadium turf from below their audience’s feet. Their catalogue is spotty – the sardonic Brit rock of Whatever People Say I Am, That’s What I’m Not and the monster riffs of AM make those, for me, the band’s two very good records – but in a cursed era of subpar guitar music I’ve been happy to call the Sheffield four-piece one of the best bands on the planet. To see their Glastonbury set in 2013, even on television, was to become a card-carrying believer.

Here’s the thing, though: Arctic Monkeys’ most recent album, Tranquility Base Hotel & Casino, from earlier this year, is the antithesis of arena music. It sounds like it was recorded in a dim hotel bar to an audience of about seven travelling salesmen. No prerelease singles were put out, as the band saw the project as a single, cohesive work. These are cuts that were never meant to sit alongside rollicking tracks like Don’t Sit Down ’Cause I’ve Moved Your Chair. So touring the album becomes a challenge: nobody who shows up at 3Arena will accept a set that doesn’t feature a healthy dollop of hard-rockin’ hits.

Decorated with brash carpet and ostentatious lights, the stage is gloriously gaudy, and to add another retro ripple the big-screen relays are decorated with an old-school filter. The set begins with Tranquility Base Hotel & Casino’s opener, Star Treatment. The band, also decked out in throwback threads, perform the song as if only a handful of drunk gamblers are in the room.

The arena is 1,000 times more lively for the band’s familiar, upbeat cuts. The gap between old and new is laid out

Perched at a small piano, Turner sings softly, for himself. The performance is far more intriguing than the studio version of the track. Turner is on his heels for the next two numbers, though. Matt Helders slaps his drums on the rollicking Arabella and Brianstorm as the microphone stand ends up behind Turner’s head. The arena is 1,000 times more lively for these familiar, upbeat cuts. The gap between the band old and new is already laid out.

A huge lighting fixture that descends from the ceiling gives the stage a more intimate feel when the band play slower numbers. The decade-old 505 flows into Tranquility Base Hotel & Casino’s title track via a selection of keyboard squiggles, while on Cornerstone Turner struts around with the mic in hand, working the crowd like a lounge singer who depends on tips and free drinks.

But there’s no getting around the main problem: most of the new tracks are terrible. Tranquility Base Hotel & Casino won’t be remembered as Arctic Monkeys’ best phase.

They at least play enough hits to placate the crowd, including, during the three-song encore, I Bet You Look Good on the Dancefloor, one of those debut singles that a band, no matter how much they achieve in their career, can never leave a stage without playing.

So maybe it hasn’t been vintage Monkeys. That’s okay. Struggling with something new is infinitely more interesting than playing it safe.