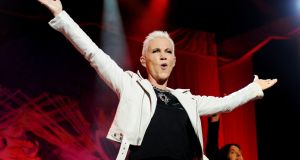 Music star Marie Fredriksson of the Swedish pop-rock duo Roxette has died at the age of 61. The singer, known for hits including It Must Have Been Love and Listen To Your Heart with co-star Per Gessle, died on Monday following a 17-year battle with cancer.

In September 2002, Fredriksson had a seizure in her bathroom and suffered a cracked skull. A subsequent MRI scan revealed she had a brain tumour, and she was given a 25 per cent chance of survival. She survived, but had health problems as a result of radiation therapy. She was able to perform until 2016, when she announced her retirement due to the effects of her illness.

Her death was revealed in a press release by the band’s management company. “It is with great sadness that we must announce that one of our biggest and most loved artists is gone,” Fredriksson’s manager said in a statement.

Gessle said in a statement: “Time goes by so quickly. It’s not that long ago we spent days and nights in my tiny apartment in Halmstad, listening to music we loved, sharing impossible dreams. And what a dream we eventually got to share! Thank you, Marie, thanks for everything. You were an outstanding musician, a master of the voice, an amazing performer.

“Thanks for painting my black and white songs in the most beautiful colours. You were the most wonderful friend for over 40 years. I’m proud, honoured and happy to have been able to share so much of your time, talent, warmth, generosity and sense of humour.

“All my love goes out to you and your family. Things will never be the same. P.”

Roxette rose to international fame after forming in Sweden in the late 1980s.

Their single The Look from their second album Look Sharp! was their global breakthrough hit in 1989, followed by much-loved classics Listen To Your Heart, It Must Have Been Love – which was included on the soundtrack to the Julia Roberts and Richard Gere film Pretty Woman – and Joyride.

Roxette have sold more than 80 million records and won a slew of music awards, including an MTV Video Music Award and in 1990 they were nominated for a Brit Award for best international group. They have released 10 studio albums, four of which charted in the top 10 in the UK.

Fredriksson is survived by husband Mikael Bolyos and her two children Josefin and Oscar. – PA, Guardian