Opposition describes latest delay to broadband scheme as a ‘betrayal’ 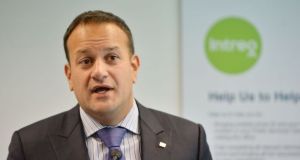 Taoiseach Leo Varadkar: he had said a decision on whether to proceed with the plan to roll out high-speed internet access to rural Ireland would be made by Easter. Photograph: Alan Betson

The Government has claimed the National Broadband Plan is not on the “long finger” as Opposition figures described the latest delay to the scheme as a “betrayal” of people waiting for high-speed internet access.

Taoiseach Leo Varadkar had said a decision on whether to proceed with the plan to roll out high-speed internet access to rural Ireland – estimated to cost €3 billion – would be made by Easter.

The Cabinet meets for the last time before Easter on Tuesday, and Minister for Communications Richard Bruton said Ministers would not now meet the timeline outlined by Mr Varadkar.

“The important thing is that we make this in a timely way,” Mr Bruton said. “I think the Taoiseach has made it clear he is not proposing that this be delayed for any significant period, but at the same time we have to be conscious that there are other affairs that are happening simultaneously and the timing, giving Government time to give the attention to this particular decision.

“We need the space to do that. I can assure you there is no intention to drag out this process.”

Tánaiste and Minister for Foreign Affairs Simon Coveney, speaking in Cork, said broadband was not coming before Cabinet on Tuesday “but it’s not on the long finger”.

“There’s not going to be a long delay here ,but there is some more work to do before Minister Bruton can bring the broadband proposals to Cabinet, but we are not talking about months here, we are talking about weeks.”

Rural broadband is likely to be one of the key issues in the local elections on May 24th, and Government figures suggested the scheme could be launched in the coming weeks in the lead up to polling day.

However, the Opposition strongly criticised the delay. Timmy Dooley, the Fianna Fáil spokesman on communications, said it was a “disgraceful betrayal of the people who have been waiting for so long, and who depend on this rollout”.

“There is no doubt about it; the constant delays are having a tangible negative impact across Ireland. Farmers are required to complete more of their applications for schemes online – impossible if they don’t have broadband. Students are sitting in the local McDonald’s or town centre to avail of the wi-fi there to complete their homework, and SME’s are unable to upgrade or expand their businesses online. It’s nothing short of a farce at this stage”.

Sinn Féin’s Brian Stanley said: “The people of rural Ireland have waited long enough, and I do not believe that this Fine Gael Government are treating this situation with the appropriate urgency and seriousness.”