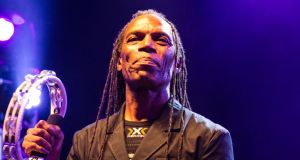 Roger Charlery, the vocalist of The Beat and General Public better known as Ranking Roger, has died aged 56.

The English singer died on Tuesday at home surrounded by family, according to a statement on The Beat’s website. It said: “He fought & fought & fought, Roger was a fighter. Sadly Roger past away a few hours ago peacefully at his home surrounded by family. Roger’s family would like to thank everyone for their constant support during this tough time.”

Charlery had a stroke last summer and was reportedly diagnosed with two brain tumours and lung cancer in recent months.

He founded The Beat in Birmingham in the late 1970s. The band mixed ska music with parts of pop, new wave, punk and Latin, and pioneered two-tone music. The band’s biggest hits included Mirror in the Bathroom and their covers of Can’t Get Used to Losing You and Tears of a Clown.

They were most successful in North America, where they were known as The English Beat, to distinguish them from a US band.

The musician and activist Billy Bragg paid tribute to the musician, who played in bands with members of The Specials and Dexys Midnight Runners during his nearly 40-year career. He said: “Very sorry to hear that Ranking Roger has passed away. Rest easy, Rude Boy.”

Pauline Black, who fronted the two-tone revival band The Selecter, also took to social media to pay tribute. She posted a short excerpt from Hamlet, which read: “Goodnight sweet prince. And flights of angels sing thee to thy rest.”

Despite health challenges, Charlery released an album, Public Confidential, in January and finished a memoir. – PA