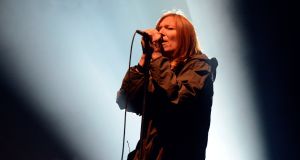 In the summer of 1994, when many alternative-rock kids were kicking up mud to Nine Inch Nails and Green Day, Dummy, the debut album from the Bristol-based group Portishead, rolled in like a moody fog.

Although it was rooted in the hip-hop production techniques of sampling, scratching, crate-digging and loop-making, Dummy was a different melange of vintage touchstones. The producer Geoff Barrow sampled a spy soundtrack by the polymath Lalo Schifrin; the guitarist Adrian Utley provided twangy counterpoint reminiscent of an Ennio Morricone score; and the singer Beth Gibbons crooned delicate, unsettling poetry fragments like torch songs. (The studio project’s lineup was rounded out by its engineer, Dave McDonald.)

A quick and unexpected success, Dummy scored hits with Glory Box and Sour Times, won the Mercury Music Prize and ultimately spawned a slew of imitators. The group became one of a handful associated with the sound writers called trip hop, alongside Massive Attack and Tricky, acts that melded methodically slow breakbeats with murky atmospheres and floating melody. In a meta twist, Dummy itself became prime sample material for many 1990s rap producers, including Timbaland, Souls of Mischief’s Opio and the Arsonists’ Q-Unique. Its influence lives on today in the stylized vintage of Lana Del Rey and the murky beats of SoundCloud rap.

Portishead released a second album in 1997, then went on hiatus for a decade, returning in 2008 with Third. Today, Barrow drums for the brittle post-punk trio Beak> and is an in-demand soundtrack composer; Utley is a session guitarist and releases music with his Guitar Orchestra; and Gibbons can be heard on a version of Henryk Gorecki’s Symphony No 3, recorded with the Polish National Radio Symphony Orchestra.

Dummy turns 25 this week. Two of its core creators spoke on the phone about its origins and impact. These are edited excerpts from the conversations.

How and why did you get a vintage sound to your loops?

Adrian Utley I was always deeply suspicious of digital recording, having been really into Blue Note and the fantastic recordings that started with [the label’s engineer] Rudy Van Gelder. I just didn’t like the sound of digital stuff.

And you used broken gear too

Barrow Well, that was our gear. We weren’t there when classic records were made, so we would have to kind of come up with some kind of vision of why things sounded like they did. When you’re in a car and you’ve got a cassette player and one of your speakers is broke on one side but it sounds cools, that’s what we would want to replicate. So putting it through a broken amplifier would surely do that or lead us on the way to it. It’s very easy to record instruments to sound like instruments. But to actually have that kind of distress and weight and everything else, that’s what we were into.

When you made this record, you weren’t even technically a band yet. What were your impressions of Beth Gibbons?

Barrow I was a kid into hip hop and production, and all I used to do was smoke 40 cigarettes a day and stay on my sampler. She was a grown-up and she was singing grown-up things.

Utley She’s very, very, very, very different from what you’d imagine. And she’s incredibly shy. I got to know her quite slowly, really. And I’m still getting to know her; she’s complex. Like all good people, you spend your life learning about them, don’t you?

Do you remember coming across the Lalo Schifrin track (Danube Incident) that you used for Sour Times?

Barrow You don’t go, “Wow, this is going to be an international smash hit.” You just kind of go, “I’m going to loop it up and see what happens.” What was really funny was the intro of it that we used as the chorus is actually faster than the groove. So I had to slow it down and chop it into bits. It’s kind of like semitone out of tune with the verse. That’s “hip-hop tuning” isn’t it? That’s the whole point of it.

It’s funny that you’re into all these messed-up, discordant, broken-sounding things, and people…

Barrow …consider it a dinner-party album.

Barrow I mean, that was tough to take. Those people bought the records and made the band big. But it’s a double-edge sword, isn’t it? Because, at the same time, we absolutely hate it. Beth’s lyrics, her honesty and her feelings, I think that was brilliant about our success, because it meant that people would hear some stuff that was coming from a real angle. We were into people like Nirvana, Polly Harvey, traditional singer-songwriters, that were truthful about themselves. It’s nice when people could hear Beth’s stories. But in the sense of people actually having a dinner party and putting our music on, I would want to go in with a baseball bat and smash the f*** of their fondue set.

You’ve actually said that to people?

Barrow Yeah. I mean, I thank them first! “Thank you for buying the record.” Then, uh, “I think you’ve got the wrong idea of the record. Maybe go home, and put it on, and turn it up as loud as you can.” It was definitely a thing that people would listen to dub and reggae and slower beats really, really loud. If you go and see a sound system, it’s going to be deafening. And that’s kind of where we thought we kind of were. People used to go see Jah Shaka, and it was so terrifyingly loud that people would poo themselves in the audience. You could never take a tape machine and record it because it’d be distorted.

When Dummy blew up, you had to go out and tour. And you weren’t a traditional band

Barrow No, we had no intention of playing live. Me and Beth, we were the kind of fish out of the water, really because both of us never toured before. I was doing press as well as the tour. And to add to that, the success of the band, and the interviews, it kind of really got on top of me.

How did that affect you at the time?

Barrow Mental-health issues weren’t really talked about back then unless you had really lost the plot somehow. I had mental-health issues since I was a kid. I was kind of being sick a lot. I was a bit bulimic. I had massive anxiety, really. So, when we were into the second record [Portishead, from 1997] I was already shook to pieces.

The songs from Dummy ended up in a lot of movies

Barrow Terrible movies, yes. But the thing is that we never really wanted to work with unethical brands. We all have got a fairly good living out of music. We don’t need to use a fashion company, or an oil company or a petrol company or whatever that basically are actively crushing poorer people and the planet and use our music to it. So we had a fairly strong vibe about that. We’ve basically turned down tens of millions of pounds, I think. Someone’s got to say no at some point. And a lot of people don’t. But when it came to films we had a bit of an open policy. As long as they’re not trying to make Beth out to be singing some kind of sexy song, which always used to happen with Glory Box. There was always some kind of producer saying, “Yeah, we want to use Glory Box over this scene.” Is it a sex scene? And they would go, “Yes, it’s really sexy,” and we’re, like, “No thanks.”

Utley I think we’ve turned down probably 95 per cent of the things that people have asked us to do. A few have slipped through the net without us realising, actually. I saw a Nicolas Cage film, called Lord of War. I was in the cinema, watching it; there’s basically a sex scene, and it was my guitar solo off Glory Box. My girlfriend looked round at me and went, “Did you clear this?” And I went, “I don’t think so.” And I jumped up and ran out and rang our manager, and she said, “Yeah, you cleared it.” That slipped past us without even realising what the hell we’d done.

People seem to like having sex to this record

Barrow I couldn’t tell you, because I never have. – New York Times

Desmond Morris on the Irish: ‘There’s a humour there, and a love of the eccentric'
10