Foo Fighters at the RDS: Everything you need to know 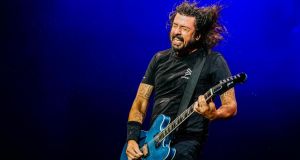 Dave Grohl holds a distinctive place in rock history as the founder, 25 years ago, of one of the world’s most successful guitar bands, especially given how quickly that came after the success of his previous group, Nirvana. Some might argue that Foo Fighters’ best days are behind them, but their songs are virtually unbreakable – the combination of melody with guitar has prompted many an air punch at venues around the world – and the band continue to sell out shows pretty much wherever they play.

The British bands Hot Milk and Frank Carter & the Rattlesnakes.

When do they play?

At the RDS Arena, in Dublin, on Wednesday. And they’re on stage slightly earlier than you might expect. Hot Milk kick off at 5.45pm, Frank Carter & the Rattlesnakes follow at 6.45pm, and Foo Fighters take over at 8pm.

Public transport is the best way to get to the RDS. Leave plenty of time to get to and from the venue.

By Dart Lansdowne Road and Sandymount Dart stations are a 10- or 15-minute walk away, depending which entrance of the arena your gig ticket is for. If you’re coming by train from outside Dublin, change from your intercity service at Connolly or Pearse stations. The last Darts of the night leave shortly after 11.30pm.

By car Parking is extremely limited around the RDS, which is in a residential area. The Garda will also be operating a traffic-management plan. So use a car park in central Dublin and come the rest of the way by public transport (or on foot ). AA Roadwatch will have traffic reports. on traffic on your route: www.theaa.ie/roadwatch/newsroom.

Stay up to date The gig organisers recommend downloading the Evntz app for the latest transport information.

The band vary their set list a bit, but in Glasgow at the weekend they played:

Not when we looked. Ticketmaster.ie may have some resale tickets when you go to check. We wouldn’t advise buying tickets from an unaccredited source.

Allow time for security checks on the way in. Bags larger than A4 size will not be permitted. All bags may be searched, and this can be time-consuming, so consider going bagless for easier entry. There will be no cloakroom or storage facilities. You will not be allowed to bring umbrellas, alcohol (or other food and drink), garden furniture, selfie sticks, flares, glasses or cans into the venue.

Yes, but not with a professional cameras, or a camera with a detachable lens. So stick to your smartphone. Video cameras and audio recorders, iPads and GoPros are also banned.

Wednesday is due to be showery in Dublin. The worst of the rain should be over by about 6pm, but there could be a bit more around 9pm. Temperature are likely to be around 16 degrees, cooling down a little later on.