The Academic, Mick Flannery and Muireann Nic Amhlaoibh among those offering streamed shows 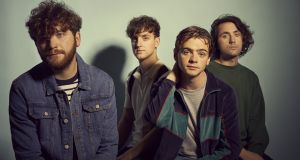 The Academic ‘have a lot of dates in the diary for 2021 and we would love nothing more than to be out playing shows’. Photograph: Enda Bowe

This time last year we were looking forward to so many gigs, concerts, shows, performances and events that we could hardly arrange a suitable schedule to attend even half of them. But then, from March, the ground under the Irish music industry went from concrete to clay, and the remainder of the year swayed between hopeful and hopeless to resignation and defiance.

Usually at this point in the year, music venues across the country would be putting up the ‘sold out’ signs for their respective New Year’s Eve gigs, but instead it’s a slew of live-streamed shows from selected venues. The majority of the streamed shows have been made possible due to the funding provided by the Department of Tourism, Culture, Arts, Gaeltacht, Sport and Media from the Live Performance Support Scheme.

Here’s a selection of what to expect; visit the respective venue websites for further details, and schedule accordingly as you ring in the new and kick out the old. While you’re there, and if you can manage it, make that a really good kicking.

The Academic, Whelan’s, Dublin, whelanslive.com
With this year’s Acting my Age EP, the Westmeath band deviated subtly and neatly from their highly melodic pop/rock. Expect their second album – the follow-up to their acclaimed 2018 debut, Tales from the Backseat, to be released in 2021.

The Academic’s Craig Fitzgerald on 2020/2021: “While no substitute for live gigs, online streaming has been great for The Academic. It has got us back on stage together, given us a way to reach our fans and spread some joy in what has been one of the strangest years we’ve had as a band. It would be nice to think we will be back out on the road in 2021 but who knows! There were a few false dawns in 2020 - they really have been big voids to fill - so let’s hope the vaccine proves successful and we can get back to some kind of normality. We have a lot of dates in the diary for 2021 and we would love nothing more than to be out playing shows. We are cautiously optimistic that it can be a year where musicians and crew can get back out. I suppose we just need to be a little bit more patient before we can have live music the way we know and love it.”

Mick Flannery on 2020/2021: “I’ve been very lucky that 2020 hasn’t effected too negatively on me. I was grateful for the projects I was working on, they gave me plenty of hours work to fend off boredom during this odd year. One of the most enjoyable of these projects was definitely working on an album with Susan O’Neill. I’m very proud of the recordings we made and am looking forward to their release next year.”

The Seamus Ennis Arts Centre, The Naul, Fingal, Co Dublin, tseac.ie €4.99/€2.99
As part of the SEAC Live initiative during the summer, gigs were filmed and streamed live from Windmill Lane Recording Studios. Two of these (No Crows, Muireann Nic Amhlaoibh) are now being streamed via Video on Demand. Viewing price for one is €2.99, or €4.99 for two.

Susan O’Neill, Levi’s Corner House, Ballydehob, Co Cork, leviscornerhouse.com
Known by the acronym SON, Susan O’Neill has made noticeable advances over the past few years. Old and new material will be performed, including the song Baby Talk, which she recently collaborated on with Mick Flannery.

Susan O’Neill on 2020/2021: “I developed an appreciation for the existence of new outlets for gigs and ways to interact across the world. While grateful to have these online platforms they also served as a reminder of how the real sharing of music, in the flesh, is something so sacred in itself it can never be fully substituted. As soon as it is safe, hopefully early in 2021, I hope to play to live audiences and share frequencies in the way we have been doing since the dawn of humans.”