Dubliner (88), described as a ‘formidable and brilliant woman’, had been sick with cancer 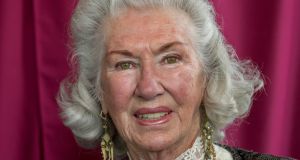 Philomena Lynott, whose death was announced on Wednesday, photographed at the National Wax Museum Plus in Dublin. Photograph: Brenda Fitzsimons 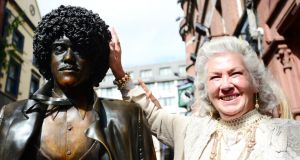 Ms Lynott had lived with cancer in recent years. Her death was announced by Hot Press magazine, with which she worked on her bestselling book My Boy about Phil Lynott’s life.

“She was a formidable and brilliant woman,” Hot Press editor Niall Stokes said. “I am really proud that we were able to participate in telling her remarkable story. Because she was indeed a remarkable woman.”

“She was hugely determined and courageous – and absolutely committed to the campaign to ensure that Philip’s memory was kept alive and his legacy celebrated.”

The Hot Press statement said her “extraordinary” life was detailed in her book, which became a national best seller. “After leaving school, she departed from Dublin to work in England. However, her plans were forever changed when she discovered she was pregnant with Philip, whose father was Cecil Parris, from Guyana.

“Philomena gave birth to Philip in a hospital in West Bromwich, beginning a turbulent phase of her life, during which she would have two more children, Philomena (born March 1951) and Leslie (born June 1952) – the full story behind which was revealed for the first time in the second edition of My Boy, published – again by Hot Press Books – in 2011.

“Philip, of course, came to Dublin while still a young boy, and went on to become one of Ireland’s most revered songwriters and musicians in a series of bands from The Black Eagles to Thin Lizzy, and finally Grand Slam, and as a solo artist.”

Ms Lynott had previously warned young people about the risks of drink and drug abuse. Her son died aged 36 in 1986 after years of drug abuse.

Speaking in 2013, after a statue of Phil was unveiled near Grafton St after it had been taken away and repoaired after being vandalised, Ms Lynott said: “Young people, when they get involved in drugs, they think it makes them laugh, it makes them happy, it makes them this, that and the other,” she said.

In 2008, Ms Lynott criticised US Republican Mitt Romney’s presidential campaign for using Thin Lizzy’s The Boys Are Back in Town.

She said: “I am really upset at Philip’s music being used in a political way that he himself would not have approved of. As far as I’m concerned, Mitt Romney’s opposition to gay marriage and to civil unions for gays makes him anti-gay, which is not something that Philip would have supported.

“He had some wonderful gay friends, as indeed I do. They all deserve equal treatment in every respect, whether it be in Ireland or in the United States. Neither would Philip have supported his policy of taxing the poor and offering tax cuts to the rich, which Paul Ryan is advocating. There is certainly no way that I would want the Lynott name to be associated with any of these ideas.”