Plus songs you have to hear by Soulé and Hammer 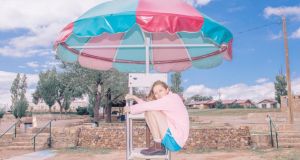 Julia Jacklin circumnavigates the cliches in reliving a break-up

What: The singer-songwriter’s second album is a soul-crushing triumph

Why: She doesn’t qualify in the category of “new” that I normally adhere to for this column, but, this particular rule-breaker is worthy of inclusion for her stunning second album, Crushing, the heart-sore follow-up to her auspicious 2016 debut, Don’t Let the Kids Win.

Jacklin circumnavigates the cliches in reliving a break-up by exploring small moments and key components that can define the narrative of how such a dissolution is remembered.

On the minimally sketched folk of Don’t Know How to Keep Loving You, Jacklin, lost in limbo and spiralling, finds a branch: “I want your mother to stay friends with mine.”

It’s the airing of simple sentiments such as this that echo the larger problem of explicating your life from another while your thoughts and actions cloud your intentions.

On When the Family Flies, she wonders if her ex watched “an irrelevant music video” she sent before the break-up, and on You Were Right she rebels: “Started listening to your favourite band / The night I stopped listening to you.”

Jacklin’s narrative is an attempt to regain control and autonomy, which is immediately under threat on first song Body, about the uncomfortable power dynamic arising from a compromising photo. “Do you still have that photograph? / Would you use it to hurt me? / Well, I guess it’s just my life / And it’s just my body.”

On Pressure to Party she tries to ignore well-meaning advice about how she should act, content to feel her own way. “Pressure to party, gonna stay in / Nothing good can come from me drinking.”

Crushing, set to sparse folk and band arrangements, is a vulnerable and refreshing take on an often-explored topic, and a testament to a superb songwriter.

Hammer – L’Orange
Irish electronic music has been united North and South in its international breakthrough status over the past few years as names such as Bicep, New Jackson, Krystal Klear and Or:la are among the brightest names in dance music. Not far behind is Hammer, Belfast producer Rory Hamilton, who has been quietly releasing quality roving house music with melodic intent. L’Orange is his latest peak.

Soulé – Coming Back Around
For an idea of the increased sophistication of Irish pop music, get a load of the new Love Cycle EP from rising singer Soulé. Aimed at the cooler end of the mainstream, the EP’s five tracks feature zeitgeist-ticking R&B pop music with dance rhythms. Coming Back Around is the standout, with hooks and a rushing chorus that slyly nod to UK garage and dance music, suggesting where Soulé may be heading next.