The Prodigy’s Keith Flint: Rat king of the sewers of music

The Prodigy’s Keith Flint, whose grit and glamour embodied 1990s London, has died at 49

Keith Flint, singer with rave group The Prodigy, has died aged 49. The Prodigy found fame in the 1990s with hits such as Firestarter and Breathe. 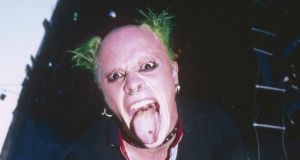 The Prodigy: Keith Flint’s performances established the band as one of the most significant of their generation. Photograph: Mick Hutson/Redferns/Getty

Keith Flint, who died at the weekend at the age of 49, will be remembered as a rave icon whose image, performances, style and vocal snarl established The Prodigy as one of the most significant bands of their generation.

Flint’s grit and glamour embodied a type of London edginess that dominated the 1990s. His initial contributions to The Prodigy were not musical. He came on board as a dancer, alongside Leeroy Thornhill.

Yet it was Flint who encouraged Liam Howlett to move beyond DJ’ing and solo work and to embrace the framework of a band.

As rave culture became Britain’s dominant youth culture, The Prodigy were propelled towards the top of the charts.

Their first two albums, all Howlett’s work, included classics such as Charly and Out of Space, on the record Experience, and No Good (Start the Dance) and Poison, on Music for the Jilted Generation.

As the political establishment and tabloid press demonised rave culture, The Prodigy and Flint were about to cross over in a major way.

Sad to hear of untimely death of Keith Flint today. Music for the Jilted Generation is a landmark album. A great talent lost. https://t.co/R5sK9k8Ncl

The news is true , I can’t believe I’m saying this but our brother Keith took his own life over the weekend , I’m shell shocked , fuckin angry , confused and heart broken ..... r.i.p brother Liam #theprodigy

If Britpop was the national grid of Britain in the 1990s, then The Prodigy were part of the sewer system, revelling in grit and grime. Its rat king was Flint, who in 1996 emerged from a tunnel demented, pierced and shorn in the video for Firestarter. That video, and his look, were instantly iconic.

The United States had Marilyn Manson. Britain had Flint, who took up where Johnny Rotten, of the Sex Pistols, had left off.

Flint soon encroached on Manson’s territory: after the release in 1997 of The Fat of the Land, the album Firestarter came from, The Prodigy broke through in the US.

That album went on to sell more than 10 million copies, and the band scooped up fans across electronic music, punk, rock, metal, industrial music and more.

Flint came into his own on stage: camp and aggressive, both ringmaster and fool, and both hype man and frontman.

The Prodigy, all of whose music has been largely Howlett’s creation, used Flint’s energy to sustain themselves at festivals and in other live settings, even when the tide was going out for their contemporaries.

They seemed volatile, but they stayed the course, releasing their seventh studio album, No Tourists, in November.

Like so many in the music industry, Flint had issues with drugs and alcohol, particularly cocaine, which he spoke about in interviews.

In the run-up to the release of the album Invaders Must Die, in 2009, he also spoke about getting sober.

Liam Howlett, his bandmate and lifelong friend, wrote on the band’s Instagram page today: “The news is true. I can’t believe I’m saying this but our brother Keith took his own life over the weekend. I’m shell shocked, f***in angry, confused and heart broken. RIP brother.”

Samaritans’ 24-hour freephone helpline is at 116-123; you can also message 087-2609090 (standard text rates apply) or email jo@samaritans.ie in the Republic or jo@samaritans.org in Northern Ireland