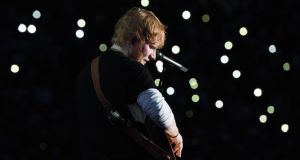 Ed Sheeran ban: the singer is due to perform in Jakarta on May 3rd. Photograph: Kevin Mazur/Getty

Almost 20 western pop songs, including hits by Ed Sheeran, Ariana Grande and Bruno Mars, have been deemed pornographic and banned from being played on radio or television during daylight hours in part of the world’s biggest Muslim-majority country.

The broadcasting commission in West Java, a notoriously conservative province of Indonesia, identified 85 “adult” songs that can be aired only between 10pm and 3am, citing concerns over “vulgar” and “negative” lyrics. The 17 tracks include Sheeran’s Shape of You, Mars’s That’s What I Like and Grande’s Love Me Harder.

The commission’s head, Dedeh Fardiah, said some of the lyrics could be interpreted as “objectifying women as sexual objects”. Her deputy, Rahmat Arifin, added: “What is banned is not the songs but the lyrics of the songs that contain pornography, pornographic association and obscenity.”

The broadcasting body in Indonesia’s most populous province, home to 48 million people, said the list was more a guideline than a regulation, although it could sanction radio and television stations for contravening it.

Neneng Athiatul Faiziyah, another member of the commission, said that the action followed complaints from the public and that there had been similar objections to thousands of songs. Faiziyah said the commission was also drawing up a list of Indonesian-language songs considered adult.

Sheeran, who is due to perform in Jakarta, whose suburbs spill into West Java, on May 3rd, has not commented on The Shape of You’s inclusion on the explicit-content list.

Indonesia has seen a rise in restrictions on content or behaviour deemed pornographic, sometimes through local bylaws based on sharia in the officially secular country.It already has strict national anti-pornography laws that critics say can be misused to threaten tolerance or creative expression in the Southeast Asian country.

Indonesia’s parliament last month dropped a draft music Bill after protests by artists and rights activists who were concerned that it could restrict freedom of expression. The proposed legislation included articles that aimed to prevent the creation of music deemed to bring in negative influences from foreign cultures or that could incite the public to acts of violence or to break the law, the Jakarta Post newspaper said. – Reuters, Guardian