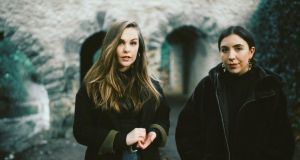 Morgan MacIntyre (right): “I will always love her for the way she makes the small seem so big and the big seem so small”

I spent my teenage years fawning over the kings of country and folk, sticking their lyrics all around my bed in the hope that they might seep into me while I slept. I still can’t believe there was a time, when I thought the best lyrics in the world came from the saddest men. I wish I’d known earlier, that the most honest story-teller amongst them was Joni Mitchell, “a painter derailed by circumstance”.

I was 18 when I first heard Joni’s voice. I had just passed my driving test and broken up with my first boyfriend. A friend made me a mixed CD and I played it while driving mournfully around the Belfast suburbs. The last song on the CD was The Last Time I Saw Richard, the final song on Blue. I remember it playing for the first time, I parked up, turned off the engine and sat still trying to catch every lyric bouncing towards me from the dashboard. Headlights off, eyes closed, I played it again, this time trying to taste them.

Throughout Blue, Mitchell gestures to ideas as grand and far reaching as her homeland or her first born whom she gave up for adoption, all the while hiding in the light of something as small and as intimate as the flickering shadow cast by a television set or a coffee percolator. I will always love her for the way she makes the small seem so big and the big seem so small.

I keep her songs with me most of the time. Sometimes she comes out in very clear ways (the first single from our debut album references a night spent listening to Blue), other times it’s more subtle, I see her in the gaps in between the words. It is then that I feel her most, when it seems there is a great distance within a song, between where I am and where I want to be, “a painter derailed by circumstance”.

Saint Sister are nominated for both Irish album and song of the year in this year’s Choice Music Prize. The live event announcing the winners takes place on March 7th in Vicar Street.

Young, glamorous socialites who indulged in every excess
10