New Irish opera company, Irish National Opera have launched an ambitious inaugural programme of 38 nights of opera across seven productions that will be performed all over the country. Video: Bryan O'Brien 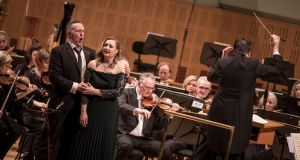 The new Irish National Opera company presented itself to the world last week. In its first year the company will present seven productions with a total of 38 performances. Crunch the numbers and you’ll see that averages out at one performance every nine or 10 days. And INO’s output will reach audiences in Cork, Dublin, Dún Laoghaire, Galway, Kilkenny, Limerick, London, Navan, Sligo, Tralee, Wexford.

What’s new, though, is not the level of output. It’s the commitment to Irish talent. As INO’s artistic director Fergus Sheil explained, the company “wants to give pride of place to Irish singers and celebrate their work at home in Ireland the way it is celebrated in leading opera houses around the world. We want to bring our creative talent to venues large and small, to communities around the country, and create thrilling experiences that will attract new audiences to our uniquely multi-faceted artform.”

He has armfuls of statistics to buttress his case, most importantly that in 2018 over 70 per cent of INO’s casts and creative teams will be Irish. The climax of the new company’s launch day was a “Big Bang!” concert at the National Concert Hall. A stream of Irish singers strutted their stuff over an uninterrupted 90-minute programme with Sheil conducting the RTÉ National Symphony Orchestra.

The concert was at once an operatic showcase, a proof of concept demonstration and a sales pitch for upcoming shows, since some of the performers are cast in this year’s repertoire.

As a proof of concept it was a hands down winner. If you want to cast operas successfully you need a pool of singers of widely varying characters to select from – the published cast lists for INO’s 2018 output run to 43 roles.

The Big Bang! singers were a healthily varied bunch, different not just in vocal colour and heft but ranging widely also in musical and stylistic approach. Given the vagaries of professional commitments, if the Big Bang! were held on another day, the lineup might have been quite different.

I found it interesting to listen to the concert as a sales pitch. Which of the performances most whetted my appetite for more, for an actual production to hear a singer in?

Bass John Molloy is one of those singers whose pleasure in plying his craft onstage is almost palpable to his audience. He likes to make a good impression, and he certainly did in The Mariner in His Barque from Wallace’s Maritana.

Soprano Anna Devin is more measured, with a refined vocal sensibility that finds her masking the technical challenges of what she’s singing. Her handling of Amour, ranime mon courage from Gounod’s Roméo et Juliette was both a crowd-pleaser and a connoisseur’s delight.

Soprano Jennifer Davis, who partnered baritone Gavan Ring in the last scene of Tchaikovsky’s Eugene Onegin has a kind of disarming purity that’s profoundly touching. And Miriam Murphy, who sang La mamma morta from Giordano’s Andrea Chénier, is almost exactly the opposite. She’s a singer with a voice so large, so effortless seeming, so distinctive that once she opens her mouth it’s as if you’re pinned to your seat by some irresistible hypnotic power. When she’s on the kind of form she showed at the Big Bang! she commands everything around her.

Drumm, Carty and Molloy are in INO’s cast lists for 2018 (Drumm in Verdi’s Aida in December, Carty in Gluck’s Orfeo in July and Donnacha Dennehy’s The Second Violinist in September, and Molloy in Offenbach’s The Tales of Hoffmann, also in September). Devin, Davis and Murphy will no doubt follow in due course. The other 2018 operas are Thomas Adès’s Powder Her Face (February), Mozart’s Le nozze di Figaro (April) and Bartók’s Bluebeard’s Castle (October).

The new company’s formal launch in the Gaiety Theatre had a new work specially commissioned for it. The score of Brian Irvine’s Opera – It’s all about like . . . carries the explanation, “Random thoughts on opera as expressed by the children of Flowerfield Primary School, Navan”. Think of the piece as an operatic version of the Academy Award nominated Give Up Your Aul Sins and you be on the right lines, with children’s thoughts on opera replacing their responses to the Bible.

So, opera is “like one of the things that you don’t really like to go and see but when your parents force you to go and see it and when you see it you’re like – oh my god, that was actually really good, really good”. INO will be hoping that more and more people will feel like that.

The Arts Council’s €2.8 million grant for INO marks a welcome uplift in support for opera, and the council’s chair, Sheila Pratschke, sounded deeply moved when she called the birth of the new company “a golden moment” and said it was “one of the most exciting days of my life”.

At the same time you have to bear in mind that back in 2011 the council believed that €4.5 million, adjusted for inflation, would be the minimum necessary to fund an Irish National Opera company in 2014. And it’s insistence on this was a factor in derailing the Irish National Opera company that Martin Cullen envisaged when he was minister for arts.

The big fights down the road won’t have anything to do with singers. They will all be about money.