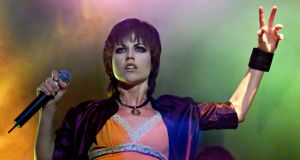 Media outlets around the world were quick to offer reports, obituaries and fond reminiscences on the life of Cranberries singer Dolores O’Riordan following her death at the age of 46.

In an article posted on its website, the BBC noted the Linger singer from a humble Limerick background grew up as the youngest of seven children in her family, and had written songs since the age of 12.

Patched in with a series of glowing tributes from international celebrities is a catalogue of the troubles which afflicted the talented vocalist through the latter years of her life in particular, including well-documented struggles with mental illness.

Writing in the Telegraph, the newspaper’s music critic Neil McCormick remembers O’Riordan as a gifted but flawed individual.

“This sense of a thin emotional skin was her biggest attraction. Alternating between feyness and fierceness, she possessed a quality of extreme sensitivity that feminised The Cranberries’ slick Celtic rock. The band were never a critical darling, but frontwoman and chief songwriter O’Riordan’s emotional pitch and earworm hooks found a resonance with fans of grunge, emo and the edgy drama of American alternative rock.”

In the Guardian, Alexis Petridis recalls how the Cranberries’ seven-time platinum album No Need to Argue followed a surprisingly poor UK performance for the band’s 1993 debut album Everybody Else Is Doing It, So Why Can’t We?

The writer chronicles O’Riordan’s musical exploits right to the end of the life, saying the following about the Cranberries’ last album Something Else released in 2017:

“Whatever else had happened in the intervening years, she was as capable of expressing a delicate sense of yearning in her forties as she had been nearly a quarter of a century before.”

A New York Times report on the singer’s death notes the societal transcendence of some of the band’s biggest hits:

“Ms O’Riordan wrote lyrics and often music for the Cranberries’ 1990s hits, including Linger (which remained on Billboard’s Hot 100 chart for 24 weeks) and Dreams, which proclaimed both vulnerability and steadfastness. She was the sole writer of the noisier, angrier Zombie, a response to an Irish Republican Army terrorist bombing in 1993.”

Describing O’Riordan as an “international sensation” in the headline of an obituary, the Washington Post emphasises the stratospheric success enjoyed by the Cranberries, propelled by the lead vocals of its diminutive frontwoman:

“Over the course of the band’s career, the group released seven studio albums and sold more than 40 million copies worldwide. Ms O’Riordan’s unusual and immediately recognisable voice alternated between delicate and powerful rawness and, with her yodels and Irish accent, came to characterise the band’s sound.”

O’Riordan spent years of her life alternating between Ireland and Canada, where her former husband Don Burton lives. The Globe and Mail recalls her fondness for the country, as expressed by O’Riordan during an interview in 2009:

“What’s amazing is — I actually have problems getting it into my head — Canada is so big, right? And Ireland’s small you know; you drive from coast to coast in three hours. You can really get lost here, and I like that,” she said.

“The seasons are so dramatic here — from the snow in the winter to the beauty of the autumn, the colours of the leaves falling — so I have a piano outside my window and sometimes I start off there with ideas, just using nature as a backdrop.”

Elsewhere, in an article which gives prominence to issues of physical and mental health faced by O’Riordan during a life that was “full of ups and downs”, Australian title The Age quotes the singer on her Limerick upbringing:

“My mum always had a softer spot for boys, as a lot of Irish women do. If you were a girl, you’d have to sing or wear a pretty dress. But boys could just sit there and be brilliant for sitting there and being boys. It makes you that little bit more forward. Pushy. I was singing, always.”