Shane MacGowan was honoured with a gala concert to celebrate his 60th birthday at the National Concert Hall in Dublin, he was also presented with the NCH's lifetime achievement award by President Michael D. Higgins. Video: Ronan McGreevy 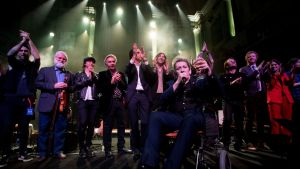 Nick Cave, Bono, Sinéad O’Connor, a Sex Pistol and the President of Ireland are at the National Concert Hall for Shane MacGowan’s 60th birthday. I love MacGowan’s music but this feels like the set-up to a joke.

I would never have bet on MacGowan being a national treasure at 60. The Pogues should have been a novelty act, a nightmare of ersatz paddywhackery, but their take on Irish folk music was infused with amphetamines and punk irreverence and, most importantly, MacGowan’s eye for the romance in metropolitan squalor. And now, after 30 Christmases of Fairytale of New York, MacGowan is recognised as a genius and the President is here to honour him.

In the lobby beforehand people are wondering what to expect. Will this be a sedate “concert” or a rowdy “gig”? All the signs say “concert”. It’s in a “concert hall”. There’s an interval. There’s a “musical director” – effusive, flugelhorn-wielding Terry Edwards. There’s a “host”, the quietly passionate John Kelly. But then within one song the American rocker Jesse Malin is telling the crowd to stand up and they never entirely sit down again. They spend the rest of the event singing along, whistling, calling out song titles. So it’s not a concert. It’s a gig. Possibly even a hoolie.

The backing band for the night is virtuosic and joyful and includes Sharon Shannon, Steve Wickham from the Waterboys and a smattering of Pogues.

Preternaturally youthful Cait O’Riordan bounces around her bass while smiling broadly. Spider Stacy, no longer one for beating himself over the head with a tea-tray, alternates between shrieking and playing the tin whistle. Terry Woods holds himself like a man who has been in all of the important folk bands, and he has (the Pogues, Sweeney’s Men, Steeleye Span), while Jem Finer jumps ably between banjo and saxophone, safe in the knowledge he can well afford two instruments, what with the royalties from Fairytale of New York.

There are a lot of important rockers here. Glen Matlock, who first saw MacGowan in the front row of a Sex Pistol’s gig, joins Spider Stacy, Jesse Malin, and Clem Burke from Blondie for a three-song garage rock opening set. Later, the guy from 21 Jump Street (Johnny Depp) appears onstage in the guise of your uncle having a midlife crisis and Carl Barat from the Libertines dons a flatcap and warbles serviceably on two songs.

Lithuanian supermarket owner Bono even makes a surprise appearance, falsettoing like a pleasant drizzle all over A Rainy Night in Soho (I regard Bono more like an atmospheric affect than a musical reality, but it’s quite good).

It’s an evening with many moments of brilliance. “This is for all those people who said Shane wouldn’t see 30,” says Damien Dempsey, shortly before leading us all in a life-affirming singalong to Bottle of Smoke. Cerys Matthews sings a lovely version of The Broad Majestic Shannon which John Kelly dedicates to the late Dolores O’Riordan, and it feels strange for a moment to be honouring one musical legend in the shadow of another’s death.

Camille O’Sullivan has great fun adding Brechtian menace to The Sickbed of Cuchulainn and Imelda May has even more fun flailing about note-perfectly to Fiesta. Terry Woods duets with the supernaturally-voiced Lisa O’Neill on Streets of Sorrow/Birmingham Six. “Sometimes songs are so powerful people want to ban them,” says Kelly.

After the interval, Sinead O’Connor appears unannounced to sing a devastating version of You’re the One accompanied by just piano and flugelhorn. Lankum deconstruct The Old Main Drag into a powerful dirgelike hymn. Floppy, clappy groovester Bobby Gillespie slows A Pair of Brown Eyes until it’s woozily delightful. And Glen Hansard and Lisa O’Neill do a sweetly awkward dance to the outro of a beautifully-rendered, if seasonally-confused, Fairytale of New York.

And then we’re close to the end. Nick Cave emerges and booms out the first verse of Summer in Siam before being joined by Shane MacGowan himself, sitting in a wheelchair pushed by his partner, Victoria Mary Clarke. There he is, the creator of all these brutal, tender, raucous airs about drinkers, war veterans, rent boys, gamblers, exiles and lovers. He looks frail as Cave sings to him, but then he sings himself and his voice is still deep and rasping and vulnerable and stirring. It’s moving to hear it, the voice that first sang the melodies we’ve been listening to all night.

Afterwards there’s a spontaneous outbreak of Happy Birthday from the audience. MacGowan goes on to sing a rousing version of Wild Mountain Thyme. Then all his guests surround him and if a bomb went off that would be it for the Irish music scene. The President appears onstage and gives him a National Concert Hall lifetime achievement award and it seems like an important moment to be witnessing – a truly original artist being honoured by his musical peers.

And then we all go home with his songs lodged in our heads, wondering what we’re going to do for our own birthdays.