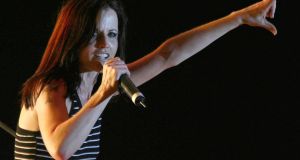 Tributes have been pouring in for Cranberries lead singer Dolores O’Riordan, who was found dead in a London hotel yesterday aged 46.

Luminaries from the worlds of music, arts, culture and politics took to social media overnight and this morning to pay their respects to the renowned vocalist.

“I recall with fondness the late Limerick TD Jim Kemmy’s introduction of her and The Cranberries to me, and the pride he and so many others took in their successes. To all those who follow and support Irish music, Irish musicians and the performing arts her death will be a big loss.”

“My first time hearing Dolores O’Riordan’s voice was unforgettable. It threw into question what a voice could sound like in that context of Rock. I’d never heard somebody use their instrument in that way. Shocked and saddened to hear of her passing, thoughts are with her family.”

“For anyone who grew up in Ireland in the 1990s, Dolores O’Riordan was the voice of a generation. As the female lead singer of a hugely successful rock band, she blazed a trail and might just have been Limerick’s greatest ever rock star. RIP.”

“So sorry to hear that singer Dolores O’Riordan from the Cranberries passed. RIP.”

“Very saddened to hear news about the death of Dolores O’Riordan at the age of just 46. Dolores was an enormously successful artist internationally, first as part of the Cranberries & then as a solo artist. She made a huge contribution to the arts internationally, with millions of record sales worldwide. She was an inspiration to many across the world & had a truly unique voice.”

“Absolutely shocked to hear about the passing of Dolores O’Riordan! @The_Cranberries gave us our first big support when we toured with them around France years ago! Thoughts are with her family and friends.”

“I’m really shocked that #DoloresORiordan has passed so suddenly. I was talking to her a couple of weeks before Christmas. She seemed happy and well – we even spoke of maybe writing some songs together – unbelievable God bless her.”

“RIP Dolores O’Riordan. Dreams is in my Top 10 all time. The Cranberries are so rad. Bummer of a day.”

The Mayor of Limerick Stephen Keary said O’Riordan was a phenomenal talent who never forgot her Limerick roots. A book of condolence will open at the council headquarters in Merchant’s Quay at 10am.

“The news has come to a shock to me as well the millions of fans she had in Limerick and around the world. Dolores was a phenomenal talent and a gifted singer. She was an international success, but never forgot her Ballybricken, Co Limerick roots.”