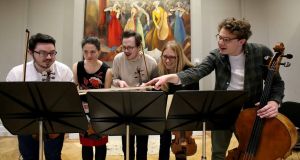 The National Concert Hall held its second Chamber Music Gathering last Saturday. The hall’s chief executive Simon Taylor describes the three-concert event as “bringing together many of our finest young and established string players for a day-long celebration of chamber music and our native musical talent”.      Although the NCH is the actual promoter of the concerts, Taylor says it “owes its inspiration and impetus to cellist Christopher Marwood and the wonderful programme for young artists at the West Cork Chamber Music Festival”. Like the festival’s support for young players, the Chamber Music Gathering is also supported by the National String Quartet Foundation.

Marwood was the cellist of the Vanbrugh String Quartet, and now, after the retirement of that group’s leader, Gregory Ellis, is part of The Vanbrugh, the group that was formed last year by the quartet’s three remaining members.

The plan of the Chamber Music Gathering is very simple and entirely laudable. Bring together a selection of the country’s established players, add in a group of twenty-somethings. Stir and mix in a generous handful of works by major masters and you’re ready to go.

In reality the whole venture has a somewhat impromptu feel to it, with something of the unpredictability of the kind of key party so memorably represented in Ang Lee’s 1997 movie The Ice Storm.      I can’t imagine that even Marwood himself can predict how all of the combinations he puts together will actually work out. You won’t envy him his task if you think of the fact that for this year’s concerts a total of 32 players were involved (12 of them performing more than once), to play four string quintets and four string sextets. And two of the players originally billed were replaced after the programme went to print.      The concerts were spread over three venues, two at the NCH itself (the Kevin Barry Recital Room and the Studio), the third in nearby Newman University Church on St Stephen’s Green. It was fascinating to hear similarly-scaled performances so close together in three such different spaces.      The Studio, with its higher ceiling and much greater internal volume, seems altogether better adapted to the acoustic needs of a small chamber ensemble than the admittedly more attractively finished Kevin Barry Recital Room.      The even bigger space of Newman University Church is also surprisingly kind to chamber music. Orchestral works, even smallish ones, produce a large enough volume of sound to become unpleasantly blurry in this church. But everything came across with appealing clarity on Saturday.      Musically, the high point for me was the performance in the Studio of Schoenberg’s early Verklärte Nacht, a piece so full of yearning that you could say it begins where Wagner’s Tristan und Isolde left off.      Saturday’s players – violinists Róisín Walters and David Tobin, viola players Neasa Ní Bhriain and Martin Moriarty, and cellists Miriam Roycroft and Annette Cleary – approached it with the utmost refinement. Walters’s playing in particular had a gorgeously honeyed, heart-melting quality, and the ensemble as a whole performed as if no one wanted you to miss the tiniest detail of this ravishingly sensual music.      The Chamber Music Gathering might sound like it’s a direct export of the ethos of the West Cork Festival. But that’s definitely not the case. The string quartet is at the heart of the festival’s thinking. The Chamber Music Gathering has yet to programme a single quartet. And the Gathering ignores the wealth of chamber music that involves wind and keyboard instruments and the human voice, areas of repertoire that are always celebrated during the festival.     The festival’s young artists programme embraces young composers as well as young performers – every group that’s involved gets to work with a composer and give the first performance of one of their works. And the festival has never eschewed the work of female composers, which the Chamber Music Gathering has now done for two years in a row.

The West Cork Festival is always among the earliest to announce its programme. And, to put just the matter of music by women into context, its 2018 offerings include pieces by Grazyna Bacewicz, Hildegard von Bingen, Elisabeth Jacquet de la Guerre, Barbara Strozzi, Francesca Caccini, Elizabeth Maconchy, Lera Auerbach, Deirdre Gribbin, Sally Beamish, Sofia Gubaidulina, Louise Farrenc, Rebecca Clarke, as well as a programme of “Female composers and classical heroines of the 17th century”.      The festival will run from Friday, June 29th until Sunday, July 8th, extending itself for the first time to a full 10 days. This year’s string quartets are Quatuor Danel, Dudok Quartet, Elias String Quartet and Apollon Musagète, most of whom will be tutoring the festival’s young ensembles, the Halcyon, Red Abbey, Doolan and Beckett Quartets.      Nathalia Milstein, winner of the 2015 Dublin International Piano Competition, plays in three concerts, as does Philippe Cassard, winner of the first competition back in 1988, and the lineup of singers includes return visits by tenor Mark Padmore, soprano Caroline Melzer, and mezzo soprano Lyudmila Shkirtl. Full details of the festival are at westcorkmusic.ie

Galway Film Fleadh online: The highlights of what to watch from wherever you are
6

Charlie Daniels, country star who sang The Devil Went Down to Georgia, dies at 83
7