Meet The Hu: the Mongolian metal band conquering the world

Never mind the Who, this is The Hu – ready to rock with their unique Mongolian throat singing sound 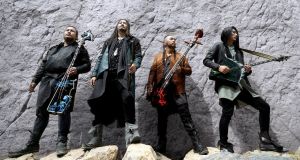 The Hu: We are is traditional meets modern and past meets present.

The Hu (pronounced as in The Who) are the most unlikely global success story in modern rock. Their unique brand of Mongolian throat singing accompanied by traditional instruments was largely unknown outside their country before a record producer put a rock beat behind it. Eighty millionYouTube views and a sell-out European tour later, they have been described by Elton John as “just the greatest new thing I’ve heard in a long time”.

We caught up with lead singer Gala ahead of their first concerts in Ireland on Saturday and Sunday.

How did you come together as a band?
We met at the Mongolian State Music and Dance Conservatory in Ulaanbaatar. In 2016, the four band members together with our producer and founder Dashka started working on the first few songs. Creating and arranging these songs helped us find the sound we were looking for.

What can you tell us about the instruments that you play?
The Hu sound is all about traditional Mongolian instruments and their unique sounds. We use Morin Khuur (horsehead fiddle), Tovshuur (three-stringed lute), Tsuur (Mongolian flute) and Tumur Khuur (Jew’s harp). The Hu is traditional meets modern and past meets present. So, we made little visible changes to our instruments because of our style.

Do you play conventional rock instruments such as guitars and basses?
Yes, we have our touring members who play the drums and percussions, bass, and guitar.

How do you classify your music?
We call our style The Hunnu Rock which is a blend of Mongolian traditional music and contemporary rock music.The title comes from the Mongolian root word for human being: “hu”. The word Eastern meets Western and the past meets present. The genre is very dynamic, as it can be metal, but it can also be classic rock. The most unique thing about the style is the Mongolian throat singing, which is an amazing sound that humans make which creates the upper and lower harmony together.

What are your Western music influences?
We have all sorts of inspiration and influence including Mongolian traditional music, Pink Floyd, Metallica, Slipknot, System of a Down, Rammstein, Tool, Lamb of God. The list goes on.

When you started out, did you think there would be a global audience for your style of music?
Yes, we expected some kind of success because we worked so hard to make these music videos. We travelled over 5,000 km on off-roads to western Mongolia to film Yuve Yuve Yu. There were days we got so hot in the desert or got so cold on a mountain top next day. We’re very honoured and humbled by the reactions of the people all around the world.

Are you surprised at your international success?
It’s kind of hard to believe sometimes. We truly are honoured by the love and support of our fans around the world! Everywhere we go our fans chant with us, they sing with us and they mosh with us.

Can you tell us about your collaborations with Jacoby Shaddix of Papa Roach and Danny Case from From Ashes to New?
Jacoby is a rock legend who we grew up listening to. Paparoach, From Ashes to New, and The Hu are on the same label with Better Noise Music. Our label offered to collaborate with them, and we’re honoured to work with them.

The Mongol Empire/Genghis Khan features a lot in your music. The Mongol Empire sometimes gets bad press in the West, but you believe it was a force for good in the world. Can you explain why you think that is the case?
Our ancestors are known as the great khaans and warriors. Mongolia has a rich cultural history with many traditions including great progressive ideas and inventions. Our ancestors, in the Mongol empire, allowed religious freedom in the 13th century which was never heard of at that time. Also, the first postal service and the first diplomatic passport, aka the Gereg, were invented by the Mongols. Mongolian music and instruments are also essential parts of our culture and we are happy to share them with the world.

What do you know about Ireland?
There so many great things we love about Ireland such as its beautiful landscape, U2, Conor McGregor, Jameson, Guinness. We are so excited to perform in Ireland. Thank you to our Irish fans for all the love and support!

The Hu’s album The Gereg is released on Better Noise Music. They will play the Limelight in Belfast on Saturday, February 15th, and The Academy, Dublin, on Sunday, February 16th. They will also perform at the Sunstroke 2020 Festival at Punchestown Racecourse on Sunday, June 14th