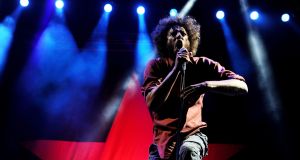 Electric Picnic has announced Rage Against the Machine as the first headline act at this year’s festival.

The political rap-rockers, who are playing together for the first time since 2011, will appear at Stradbally on Friday, September 4th, the first night of the sold-out event.

We’re over the moon to have one of the world’s most incredible live acts joining us in Stradbally this September! pic.twitter.com/DCaCIHKzvD

It will be the fourth European stop on a world tour that the band, who formed in 1991, announced yesterday; it includes two nights at Madison Square Garden, in New York, and comes after a short spring tour on which they will perform gigs close to the US-Mexico border, as well as the Coachella festival, in California.

Tickets for Electric Picnic 2020 sold out three hours after going on sale in December. Weekend camping tickets were priced at €260, with Sunday tickets for €100. Organisers say a limited number of extra tickets will be made available to Three customers through the mobile network’s rewards system.