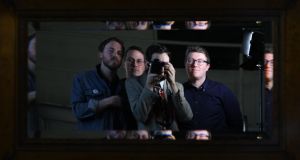 Autre Monde: ‘We wanted the music to feel like it was recorded in a Soviet bloc country by a band who only had one Madonna CD’

“What part of the body will I lose next?”

It’s a fair enough question, especially when it comes from the mouth of a singer who has the scars to prove that his onstage performances are noted for their, shall we say, enthusiasm. Paddy Hanna may not be the son and heir of Iggy Pop, but it would be no harm to check his birth cert just in case.

“We take great pride in our live shows,” says Hanna, talking about Autre Monde, the Dublin-based band he is frontman with, “and I take great pride in adding scars to my body when I perform. During our gig at Electric Picnic last year I attempted to do a very elaborate jump and fell off the stage and broke my shoulder. We got through the show, but it was the first time I’ve ever walked off stage to be greeted by paramedics.”

Hanna is talking in cahoots with fellow band member, Padraig Cooney. The idea behind Autre Monde, Hanna says, is writing songs (“in a non-jokey, truthful way”) from the point of view of “a once really hip band in the ’60s that are now in the ’80s, still trying to be as hip as they once were. What we found was a certain emotive quality to the idea of trying to feel contemporary but wanting the music to feel like it was recorded in a Soviet bloc country by a band who only had one Madonna CD. We wanted it to have that kind of disconnect but in no way mimicking contemporary sounds. We wanted to be like a band trying to fit in but in a time that doesn’t exist.”

That’s a brilliantly outre concept by which to configure music, and while we’re not going to claim that Autre Monde’s forthcoming debut album, The Imaginary Museum, comes close to capturing it, you nevertheless have to give them full credit for thinking it up in the first place. Of course, Hanna and Cooney have form in this type of thoughtful creative caper. Notwithstanding Hanna’s fully formed solo work (2014’s Leafy Stiletto, 2018’s Frankly, I Mutate), each has previously been members of groups within the framework of the dear, departed alt.pop music collective Popical Island.

Hanna (formerly of Grand Pocket Orchestra and No Monster Club) and Cooney (formerly of Land Lovers and Skelocrats) each give a respectful nod to Popical Island. In many crucial ways, they agree, it formed them as musicians and songwriters (in what Cooney once amusingly referred to as “a menage a Popical”) and then sent them on their way to different experiences. They say the first rehearsal of Autre Monde was the last rehearsal at Popical Island’s studio/hangout space, the Pop Inn.

Do you have a crisis just because people in their early 20s are making music? No, so why stop?

“The lease wasn’t being renewed, and we were all getting kicked out,” relates Cooney. “We were wondering what we were going to do next, musically. My band had broken up and there was a feeling we’d just knock it on the head, but I got bored and started asking a few people if they might like to be in a group. Paddy and guitarist Mark Chester replied. We were trying to express that feeling of dislocation, so started playing quite edgy music; it took us a while to find out where we were going, only that we wanted to be a little bit miserable. With Popical Island, we had all become used to doing two-minute songs – we’d get in and get out – and so we saw Autre Monde as a chance to try different things. One of those was to allow the songs to breathe a little bit more.”

Autre Monde - On the Record

And the band title, translated as “other world”? Padraig isn’t sure that “we like the name, but we kind of wanted to feel pretentious.” I suggest the music, perhaps, has gradually gone from Stiff Records to 4AD. “We have definitely changed tack,” he allows, “but the context of how we started out informs what we’re doing now.”

Sense of a community

Music styles aside, is there still a sense of a community for them in the way it was when Popical Island was an incubator of music talent?

“Since the Popical Island days, we’ve made a few more friends from the kind of bands that we wouldn’t have been playing gigs with,” remarks Cooney, the implication being that the collective may have been quite insular. “Autre Monde are not part of any particular scene, and that means we can play with anyone. It has also opened up the mind a little bit more, so by necessity you have to in some way readjust your conception of what you’re doing and where you are. You start to wonder are you relevant, and you realise the only way to be that is to continue making music. Do you have a crisis just because people in their early 20s are making music? No, so why stop?”

Hanna says that he enjoys the notions of hanging in there, getting the scars (sometimes literally), hearing the tall tales and understanding how they inform life and work. “I love having excessive weight on me because it gives you more to work with. The Autre Monde album would not exist if we hadn’t made it at this point in our lives; it has that sense of trying to exist but not knowing whether it should or not, and there’s something defiantly wonderful about that.”

“I certainly think we’re more confident in ourselves now,” adds Cooney, “but I know when we were making the record we were totally making it for ourselves. I’m not sure we thought we’d have anywhere to go with it.”

Whether Hanna is in band mode or a solo capacity, the nature of creativity, he says, depends on the day it surfaces. When you’re by yourself in a room with an acoustic guitar, he ponders, there’s a strong possibility that even a part of a song – lyrics, melodic structure – will emerge. When you’re part of a process that is arguably democratic, the end results are always going to be different.

I did storm out of the studio a couple of times, but what is a good creative process without tension?

“At this point, I should say that Padraig is the starting point for most of the songs. The other thing is that I’m just a temperamental, emotional wreck a lot of the time. When we were the making the record, I was in terrible emotional shape, less than I would have liked. The making of Frankly, I Mutate was fraught with one disaster after another, but in this case there was a sense of fearfulness during the recording. I did storm out of the studio a couple of times and went on my strange ranty walks, but what is a good creative process without tension?”

And what, I ask, about the perilous stage performances? Will they continue? Subsequent to his Electric Picnic fall, Hanna relates a sensible piece of advice he received from his fretful mother, whose voice he treacherously imitates: “You don’t have to break any more bones, Patrick. You can do more with a stare than with a high kick.”

Pause for laughter. “She’s not half wrong.”

Autre Monde on being produced by Girl Band’s Daniel Fox

Paddy Hanna: “We spent more time talking about Clannad than any post-punk bands. Daniel produced the album and his reaction to the names on our mood board – Peter Gabriel, Clannad, Peter Green, Starship – was one of horror. If we had made the album with someone who wanted to make a pop record, then we’d have been working with the wrong person. Instead, you want someone like Daniel, who is going to take the high-end pop songs on the record and to give them a coldness. We wanted the songs to have a cold, steely feel to them, pop-leaning but with a crude attempt to mask some deeper stuff.”

Padraig Cooney: “Daniel is great at making noise, and he brought to the album that musicianship as well as ways of treating ideas that might have been jarring to him. He has a great frame of reference and is very intuitive, so you can talk through half-formed, abstract ideas with him and the end results will arrive. And that might just be a matter of he being aware of what kind of synthesiser to use or drum sounds to administer.”

Desmond Morris on the Irish: ‘There’s a humour there, and a love of the eccentric'
10